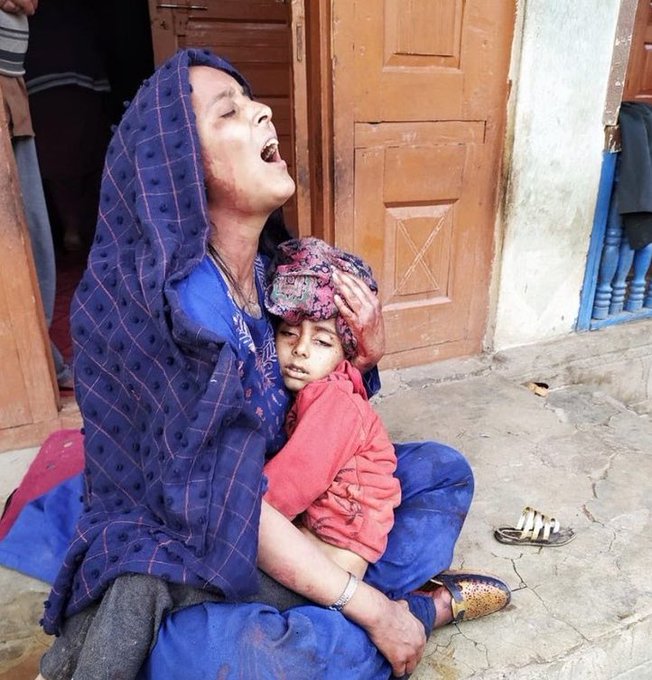 Mother wailing for the dead son in her lap. Pic/Social media

Kupwara, April 14: “Mother I am bleeding,” were the last words of the youngest victim of cross LOC (Line of Control) shelling Ziyan. He rushed to his mother’s lap and breathed his last within no time.

Majeed Ahmad Kataria, uncle of Ziyan said that at the time when cross LOC shelling began on Sunday, kids of the locality were playing outside.

“As the intense shelling started, I leaned onto the ground. So did my brother along with Ziyan. My kids ran towards their home. We were all outside the home”.

While rushing towards home, a splinter hit Ziyan. He immediately told his mother that he was hit by a shrapnel,” said Kataria.

“Mom I am bleedig,” he said. “Then he went into deep sleep in his mother’s lap and breathed his last there only.”

Ziyan’s father was also injured during the same incident while running for cover to protect himself.

“A splinter hit the left hand of my brother Bashir Ahmad Kataria,” he said.

He said that Ziyan was hit in his head and forehead just outside the door of his house.

“In the corridor of his house, his mother was waiting for him,” Kataria said.

He said Ziyan’s mother Naziya Begum saw her son’s head injured and blood oozing from the wounds. “She cried for help amid tears, but it was all over for Ziyan,” said Kataria.

Ziyan was not even able to shout out of the pain he suffered.

“The heavy exchange of artillery was going on when he was hit. We couldn’t manage to rescue and evacuate him for medical attention,” Katria said.

“Naziya went to him and held him in her lap and kept weeping in absence of any help for long, even after grave injury to him the exchange was going for at least next 15 minutes.”

He said the moment resembled the dooms day when he saw Ziyan’s father felling to his injuries and mother holding her dead son craving for help, shouting at the sky.

“The scene was really scary and everything was so disturbing and threatening like we all may get killed like him,” Kataria said.

Ziyan’s mother Naziya is in a deep shock, not able to utter a word.

Perhaps, she is not able to come terms as it is not easy to see a minor son dying in her lap.

On Sunday, heavy exchange of mortar shells by the armies of India and Pakistan claimed three lives including a minor.