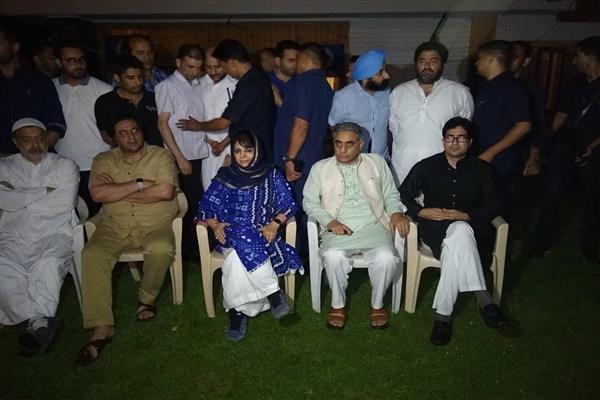 Srinagar: In a late evening development, a delegation of senior mainstream leaders led by former Chief Minister and PDP president Mehbooba Mufti called on Governor Satya Pal Malik at Raj Bhavan, where they briefed him about the prevailing situation in Kashmir, sources said.

“They told the governor that so many developments have taken place in the past few days which made the environment very scary. Through the Governor they requested Prime Minister Narendra Modi not to do away with special status of Jammu and Kashmir,” they said.

Earlier after addressing a presser in the evening at her Fairview residence on Gupkar, Mehbooba dropped at National Conference president Dr Farooq Abdullah’s nearby residence, where the two leaders had a brief meeting. “Abdullah assured of his party’s full support to Mehbooba over the issue,” sources said.

After meeting with Abdullah, the PDP chief went to Church Lane where she met Sajjad Lone and Imran Ansari. Later they also called Er Rasheed and Shah Faesal, sources said and added an all-party meeting of mainstream political parties in Kashmir is scheduled to be held in Srinagar on Sunday, after the arrival of Omar Abdullah, who is out of the state. (KNS))