Guv assured no move to change J&K special status, but we want statement in Parliament: Omar

Srinagar: National Conference leader Omar Abdullah on Saturday said Jammu and Kashmir Governor S P Malik has assured his party that no moves are planned on repealing articles 370 and 35A of the Constitution, or the state’s trifurcation.

However, the former J&K chief minister said he wants an assurance on these issues from the Centre in Parliament on Monday as “the Governor is not the final word on Jammu and Kashmir”.

Abdullah and some of his party colleagues met the Governor on Saturday on these issues. “He assured us that there was no movement on (repealing) Article 370 or Article 35A or delimitation (of constituencies in the state),” Abdullah told reporters here.

The Governor also issued a statement after the meeting, saying the state has no knowledge of any changes to Constitutional provisions and assured that the deployment of additional paramilitary forces was purely for security reasons.

Abdullah said he has asked his party MPs to move a motion in Parliament on Monday seeking a statement from the Union government on the situation that has developed in Jammu and kashmir over the past few weeks. 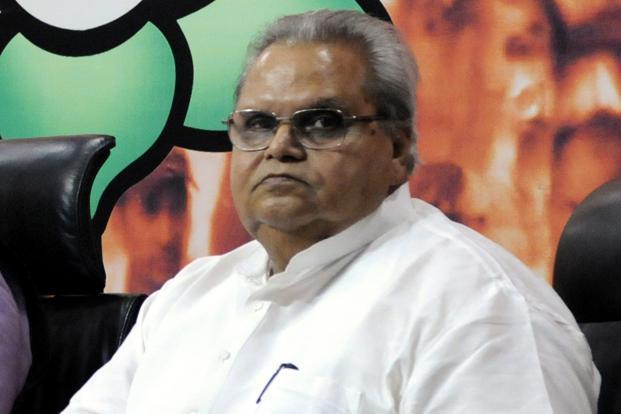 The NC delegation’s meeting with the Governor comes a day after the state administration issued a travel advisory to Amarnath Yatri and tourists asking them to cut short their sojourn and return as soon as possible. The travel advisory came after the Army said there was a terror threat to the pilgrimage.

Abdullah told reporters Saturday, “We want that on Monday the Centre also make a statement in the parliament to explain what was the need for issuing the order for vacating pilgrims and tourists. We want to hear from the Parliament that the people here need not worry.

Abdullah said his party MPs have already raised the issue in Lok Sabha last time through a calling attention notice but “I would request them to give another notice on Monday to raise this issue again. We will try to seek an answer from the government on this.”

Asked about the meeting between Prime Minister Narendra Modi and a National Conference delegation on Thursday, Abdullah said they were satisfied after the meeting as there was no indication of the threat perception that would have led to steps like evacuation of Amarnath pilgrims and tourists from the Valley.

“The PM spoke in context of the Governor’s assurance. He said he wanted elections in Jammu and Kashmir. He said he does not want any disturbance in the state. He was satisfied that this year has been better than previous years. We came out of that meeting satisfied but I was not expecting such an order (evacuating pilgrims and tourists) within 24 hours.

“We did not get any indication from the PM that there was any threat that pilgrims and tourists would need to be evacuated. That’s why the assurance we got from the PM on Article 35A and elections was all good but then this order came,” he added.

Abdullah expressed hope that the Centre will recognise that it is not in their interest to have a “restive, tense and unsettled” Jammu and Kashmir.

“Anything that the Government of India says that will help to settle the stresses and tensions that the people have here is in their interest as much as it is in our interests,” he said.

“The promises made to this state and its people have to be kept till eternity. These were not time-bound assurances … we were not told to accede (to India) on certain conditions and then after 70 years, these conditions will be changed,” he added.

Abdullah appealed to the people of the state to keep calm and control their emotions and not take any step that may align with the aim of the people with vested interests.

“Some people perhaps want that we take the law in our hands or we come out on the roads or disturb the atmosphere so that their objective is achieved but we should not give them an opportunity to succeed,” he said.

He said the NC will continue to fight politically and legally any attempt to damage the special status of Jammu and Kashmir.

A statement released by Raj Bhawan said that the governor informed the delegation that the security situation has developed in a manner which required immediate action.

“There were credible inputs which were available to the security agencies regarding terrorist attacks on the Amarnath Yatra. There has been intensified shelling on the LoC by Pakistan which was responded to effectively by the Army,” the governor told the delegation, adding “the seriousness of the threat required immediate action”.

Malik also said that the state “has no knowledge of any changes to constitutional provisions” and therefore, no panic should be created by unnecessarily linking deployment of additional forces with all kinds of issues.

“A pure security measure is being mixed up with issues with which it has no connection. That is the cause of the panic,” he told the delegation.

It is in this context that the government had issued an advisory asking Yatris and tourists to return as soon as possible, he said.

“These are a vulnerable group of people who do not know the area and are extremely vulnerable to a terrorist or a fidayeen attack. It is the responsibility of the state to provide security to all its citizens,” the governor said.