A total of six bombs exploded at three locations in Bangkok on Friday (Aug 2), injuring three people and rattling the Thai capital as it hosted a major security meeting.

Another explosive device was recovered before it blew up, a senior police officer said.

Police Colonel Kamtorn Uicharoen said three bombs exploded at the Government Complex in Chaeng Wattana and one failed to go off. Two others blew up in the Chong Nonsi area.

“The bombs in these two areas were improvised explosive devices triggered by timer,” he said.

Police said two street cleaners were hurt after a device exploded in the Suan Luang district.

Local news websites showed pictures of them – one sitting on the ground with medics and the other being taken into an ambulance. Neither appeared to have major wounds.

Eyewitnesses said a security guard had also been hurt close to the 77-storey King Power Mahanakhon building – owned by the King Power group that counts Leicester City football club among its assets. The area was partly cordoned off as police searched the area. 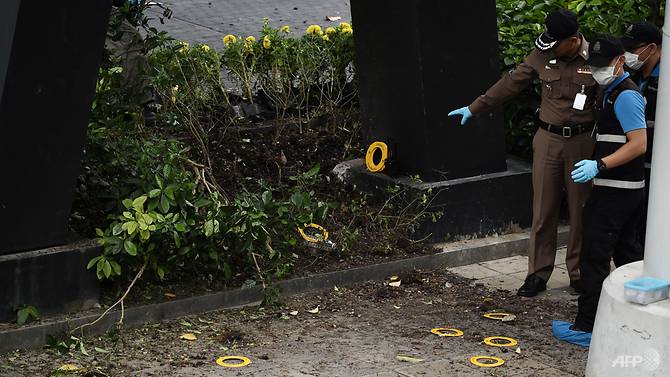 The Bangkok Post reported that glass at the Chong Nonsi BTS Skytrain station “shattered after a loud bang”.

At least two exits at the station were closed, it said.

The devices that exploded were believed to be so-called “ping pong bombs”, the size of a tennis ball. They appeared to be symbolic attacks aimed at embarrassing the government during the major summit but not designed to cause mass casualties.

“I received a report that they are ‘ping pong bombs’ hidden in bushes by the road.”

Thai Prime Minister Prayut Chan-Ocha on Friday condemned those behind the blasts.

There has been no immediate claim of responsibility for the blasts.

“On the bombing this morning, I would like to condemn those causing the situation which destroys peace and damages the country’s image. I have instructed officials to take care of public safety and those affected promptly,” Prayut said.

“The situation is being closely monitored and security measures have been tightened. The public is urged not to panic,” she said.

Bangkok is currently hosting a regional security meeting of foreign ministers from the Association of Southeast Asian Nations (ASEAN) and their counterparts from world powers including the United States, China and Russia.

None of the blasts on Friday were in the immediate area of the meeting venue.

On Thursday, Thai police said they found two fake bombs near the venue of the regional security meeting. The packages prompted a brief security scare but were quickly deemed harmless. It was unclear whether the meeting was the target.

Police said two men had been arrested in connection with the fake bombs. China’s top diplomat Wang Yi and US Secretary of State Mike Pompeo are attending the forum, along with Singapore’s Foreign Affairs Minister Vivian Balakrishnan and other regional and global officials.