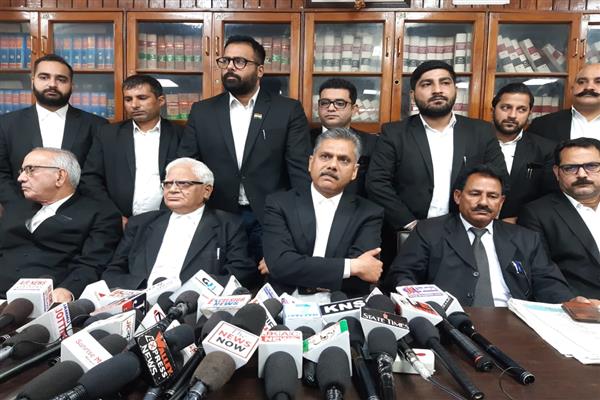 Jammu: High Court Bar Association (HCBA), Jammu Thursday distanced itself from the statement of some Jammu lawyers, including former Bar President, Jammu, regarding strengthening of Articles 370 and 35-A.

Addressing a press conference here, President HCBA Jammu, Advocate Abhinav Sharma said that entire executive committee took a decision to covey that statement made by few individual members of the Bar yesterday and day before was in their personal capacity and not was the statement of the HCBA.

Advocate Sharma said that since the nationalist image of HCBA, Jammu has been affected due to the statement of some of its members regarding Articles 370 and 35A, it was decided their membership will be suspended till they reply to a show-cause notice issued to them.

“Majority of the members in the meeting decided that they should be suspended form the basic membership of the Bar. This decision was taken because J&K Bar Association has already taken a decision and has filed an application in the Supreme Court regarding Article 35A. Before filing the application in the apex court, the general body of the Bar had decided to oppose the Article 35A,” he said.

Advocate Sharma added that since the decision of the general body was binding on all its members, the members who issued a statement in favour of Article 35A, had no authority to issue statement on their own.

“It was reiterated in today’s meeting that J&K High Court Bar Association will oppose the Article 35A tooth and nail,” he added.

On Wednesday a meeting was organised under the chairmanship of former Senior Additional Advocate General Subash Chander Gupta where prevailing situation in Jammu and Kashmir was discussed. Gupta had vehemently urged that the issue of accession of the State should not be examined on religious lines.

“An atmosphere is being created though social media, and media with a motive to mislead people about Art 370 and Art 35-A so that special status can be tinkered with,” he said while expressing dismay over the prevailing situation in the society which has ‘divided opinion between two communities.’

Former president, Jammu Bar Association, AV Gupta had also urged for retention of special status of the State and said any tinkering with Article 35-A would have “serious repercussions.”