We never went to Delhi to seek any thing for us: Omar Abdullah 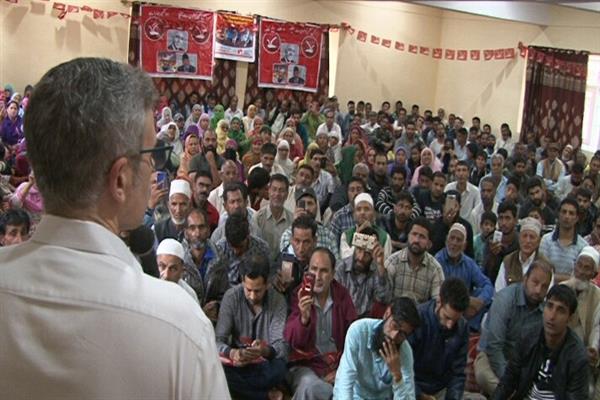 Srinagar: National Conference (NC) vice president Omar Abdullah on Thursday said that the party has never went to Delhi to seek any sort of favours.

Rejecting the intemperate rants of the Governor SP Malik against politicians regarding corruption, Party’s vice president while addressing a workers convention in Eidgah constituency in Srinagar said,

Referring to the jibes from certain quarters that only 10% people voted for party president Dr Farooq Abdullah party vice president said, “It is not Dr Farooq who is to be blamed for this. It is the administration it self who failed to create an atmosphere in the Kashmir where in people could have voted in large numbers.  If they say that only 10% voted in the parliament elections than they should ascertain as to why 90% refrained from voting.  The need of the hour requires the New Delhi to hold parleys with those who didn’t came out to vote.  The powers sitting in New Delhi are also reluctant to talk to those who have different views other than that ours. But New Delhi does not want to have parleys with any body here in Kashmir. They are only interested in those few who have been trying their level best to become leaders. The powers in New Delhi are interested in those few who take money from them. New Delhi is interested only in those whose sole agenda is to add colors to the nefarious designs of such forces as want to obliterate the identity of the state.”

He also said that the untenable advisories emanating from the administration have created fear psychosis in the state in particular the Kashmir region.

“People in the valley are going through anxiety in wake of the rumor mongering set afloat by the administration. Whoso ever goes to government offices is being warned to stock necessary household items and other edibles before 15 August.  Here what is worrisome is that the rumors are being set afloat by the people in administration itself. The rumor mongering has created panicky and fear psychosis among the people,” he said adding, “People are being told to stock ration, fill their automobiles, and switch to land lines. The news that the police stations have been told to acquire bulldozers is also keeping the rumor mill churning. People have become anxious. What is it that the present government wants to achieve by spreading such rumors?” Omar said.

Party vice President said that on one hand the GOI and the state administration is boasting off the improvement in the situation in the state following a steep decline in the militant attacks, stone pelting in the valley. “But on the other hand undue rumors are being spread by the administration itself that the state will once again be on fire after 15 August.What is it the government of India and the state wants to achieve by bullying people? It is not New Delhi that suffers whenever situation is difficult in the state. It is the people of Kashmir that bear the direct brunt of tumultuous situation.  The statements emanating from Union ministers, hinting towards the abrogation of Art 35-A after the 15 August, have also kept the rumor mills churning. The people are becoming restive.”