A suicide bomber walked into the office of Mogadishu’s mayor and detonated explosives strapped to his waist, killing six people and badly wounding the mayor, Somali police said Wednesday.

The attack, claimed by the al-Shabaab militant group, occurred after the United Nations special envoy to Somalia, James Swan, paid the mayor a “courtesy call” and left the compound, an official at the mayor’s office told The Associated Press. The official spoke on condition of anonymity because they were not authorized to speak to the media.

The UN mission in Somalia, in a tweet before the bombing, posted photos of the smiling mayor and the new envoy, saying Swan had received an overview of the “challenges” in the region.

The mayor, Abdirahman Omar Osman, and his deputy were rushed to hospital with critical wounds, and two district commissioners were among the dead, said police Capt. Mohamed Hussein. 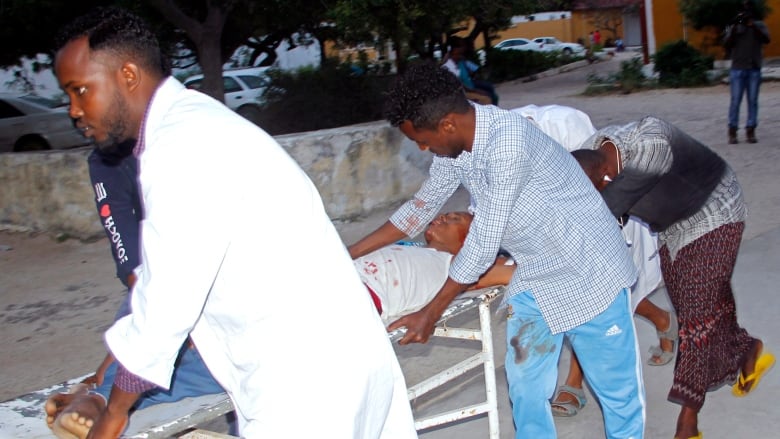 Somalia’s information minister, Mohamed Abdi Hayir, said six officials were killed and six others were wounded. He told reporters the mayor was being treated and gave no further details. He also confirmed an investigation was underway.

A Somali intelligence official who spoke on condition of anonymity said the officials killed included two local government directors and a senior adviser to the mayor.

The mayor of Somalia’s capital Mogadishu, Abdirahman Omar Osman, and his deputy were rushed to hospital with critical wounds, and two district commissioners were among the dead from Wednesday’s suicide attack, said police Capt. Mohamed Hussein. (CBC)

It was not clear how the bomber managed to enter the mayor’s office during a security meeting. Some security officials said the attacker might have co-ordinated with corrupt officials, offering them bribes for access.

Somalia has been riven by conflict since 1991, when clan warlords overthrew a dictator, then turned on each other.