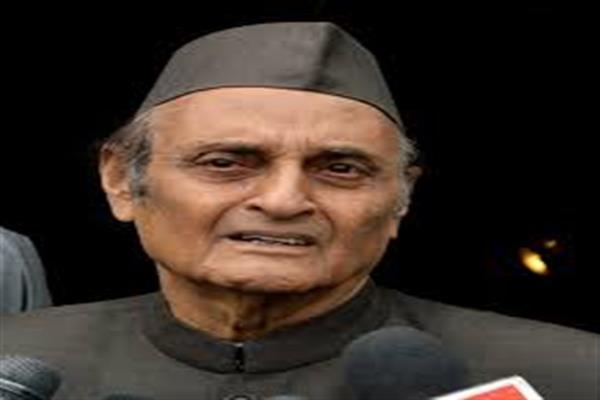 Srinagar: Veteran Congress leader Dr Karan Singh Tuesday said that resurrection and regeneration of the Indian National Congress is important not only for the grand old party itself but in the broader national interest.

“In all the confusion following the resignation of Rahul Gandhi as Congress President, we have always to keep one point in mind. The resurrection and regeneration on the Indian National Congress is important not only for the grand old party itself but in the broader national interest. The Congress alone can provide a national level opposition to the BJP juggernaut without which we will be left only with a few regional parties, thus moving into virtually a one party dominated situation,” he said in a statement.

“In a Parliamentary democracy a strong and effective opposition is essential both at the national and State levels, and this makes the confusion within the Congress all the more unfortunate,” the Congress veteran said.

Dr Singh said that in the INC constitution, as updated in 2010, has a paragraph which clearly deals with the present contingency. “In the event of any emergency by reason of any cause such as the death or resignation of the President elected as above, the Senior most General Secretary will discharge the routine function of the President until the Working Committee appoints a provisional President pending the election of a regular President by the AICC,” he said quoting the party constitution.

“This being the case, there was no reason for the Working Committee to have taken so long to come up with a new leadership structure. I have suggested that in addition to an Interim President until the AICC elects a regular one, we should have four Zonal Vice-Presidents. This would enable a broader spectrum of leaders from around the country, including younger people, to take over the party reins. Thereafter, what is needed is a comprehensive restructuring of party office bearers, including General Secretaries and PCC Presidents. This will be the opportunity to phase out those who may have rendered valuable services to the party in the past but are unable now to do so in the face of the present challenges,” Dr Singh added.

In his statement on 3rd July 2019 Rahul Gandhi had said suggested to his colleagues in the Congress Working Committee that the way forward would be to entrust a group of people with the task of beginning the search for a new President. He had empowered them to do so and committed his full support to this process and a smooth transition.

“In the light of these provisions, I see no reason as to why even after eight weeks having elapsed since Rahul announced his intention to retire at the Working Committee meeting on 25th May 2019, there has been no forward movement. I do appreciate that Congresspersons around the country were genuinely anxious that he should withdraw his resignation but being a man of principle it was unrealistic to expect him to do so and several weeks were wasted in efforts to pressurize him. He is a fine young man who has many years of political activity ahead of him, and his bold decision to take responsibility for the Congress defeat by resigning from his post is in keeping with the best parliamentary traditions around the world. We should honour his decision and move one, as a vacuum at this stage when several state elections are round the corner, is a sure recipe for disaster,” the Congress leader said.

“It now remains for the Working Committee to do what is required of them under the party constitution. Already there is a widespread sense of disappointment and disorientation among party workers around the country. Let us not forget that the Congress did receive as many as 12 crore votes in the recent Lok Sabha elections, and that there are thousands of Congress workers around the country who cannot be left leaderless. Any further delay will surely accelerate the negative spiral in which this great party finds itself. This must not be; we have to snap out of the present impasse and collectively move towards reviving the inner spirit and outer structure of the party based on its liberal, progressive and inclusive philosophy,” he added.