Any attempt to dilute unique identity of state will be resisted tooth and nail: Dr Farooq 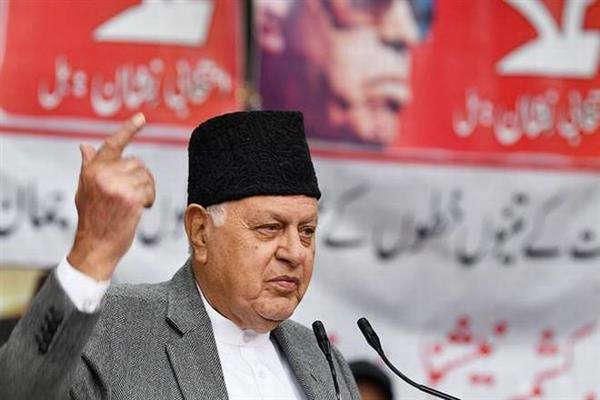 Srinagar: Jammu and Kashmir National Conference President and Member of Parliament from Srinagar Dr Farooq Abdullah on Saturday said the party won’t allow any changes in the demography of the state, saying that any attempt to dilute the unique identity of the state will be resisted tooth and nail.

Party president while addressing a public gathering at Kulipura in the Nowpura locality of Srinagar said the Muslim character of the state has been a scorn in the eyes of those forces that are inimical to the very identity and integrity of our state.

“There are forces whose sole agenda is to dilute the very pluralistic fabric of our state. It was PDP that allowed the fascists to make inroads in our state. Unfortunately such forces as are inimical to the identity of our state are using local henchmen to pursue their agenda. The mushrooming of political outfits in the valley is also suggestive of the nefarious agenda of such forces as want to demean and divide the voice of the people particularly Muslims,” he said adding, “Unfortunately no powerful Muslim voice was allowed to surface on the political landscape of India, what is happening in Kashmir cannot be singled out. Sher-e-Kashmir had prophesized that after his death, the one man political out fits will be propped up in every nook and corner of the state. The main agenda of the right wing extremists is to eliminate the powerful voice of the Muslims in the state.”

Dr Farooq while underscoring the need of having a popularly elected government in the state said, “Today we see group of people at the helm of affairs in our state that are not representative in character. How can few advisors of SAC rise up to the expectations of the people of the state? Today we see how miserably the common population is being treated. The disdain with which the people are being treated speaks volumes about the contempt the incumbent governor administration has for the local population. On one hand honorable governor says that the Yatra would not have been possible without the active support of the local population but on the other hand the same lot of people is subjected to collective detention through highway curbs. Nowhere in the world is the civilian population treated in such a discourteous manner. Had there been a civilian government in place situation would have been much different today,” he said adding, “ Today our institutions, our very identity, the territorial integrity of our state is under threat from forces as have traditionally wanted to obliterate and dissolve our special character. Economically the state is facing a grim situation, the other day the Annual budget had nothing in its kitty for the state. The much touted PM’s package also turned out to be damp squib.”

Party president said the people of the state have to make a choice now. “On one hand we have NC that has historically lent sacrifices for the protection of the identity of the state. And on the other hand we have contemporary Bakshi’s and Sadiq’s who are adding colors to the nefarious designs of the forces as are inimical to our state. The need of the hour requires us to show unity. We should not let ourselves get overwhelmed by the prejudices of cast, creed, sect etc,”he said.