Seven killed, over 200 injured as train derails in Bangladesh

Dhaka: At least seven people were killed and more than 200 injured when six compartments of Upaban Express train derailed at Baramchal in Kulaura upazila in Bangladesh’s Mowlovibazar district on Sunday night.

Of the seven, two of the deceased were identified as Monwara Pervin, 48, Fahmida Akhter, 20.

Meanwhile, a three-member probe body, headed by Railway’s east-zone engineer Mizanur Rahman, has been formed to probe the incident. 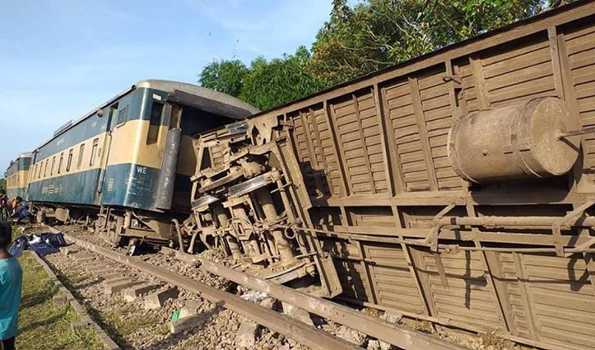 According to Dr Nurul Haque, a health officer in Kulaura Upazila, while a total of 20 seriously injured passengers were rushed to Sylhet MAG Osmani Medical College Hospital, some others have been admitted Moulvibazar Sadar Hospital.

The tradegy took place when six coaches of Dhaka-bound ‘Upaban Express’ from Sylhet veered off the tracks around 2340 hrs on Sunday after a culvert over the Barochhara Canal, 200 yards off Baramchal Railway Station, broke down, said Yardous Hasan, officer-in-charge of Kulaura Police Station.

Two of the coaches fell into the canal and one of them overturned, he added.

He said a number of ambulances from government and non-government hospitals of the region carried the injured to hospitals with the help of the district administration and police.

“On getting information, as many as 27 units of fire service members along with police personnel, were rushed to the spot who launched the rescue operation, said officer-in-charge of Kulaura Government Railway Police Station Md Abdul Malek.

The accident disrupted Sylhet’s rail communications with other parts of the country, including the capital (Dhaka). (Agencies)