‘Machinations being engineered to weaken the National Conference’: Sagar 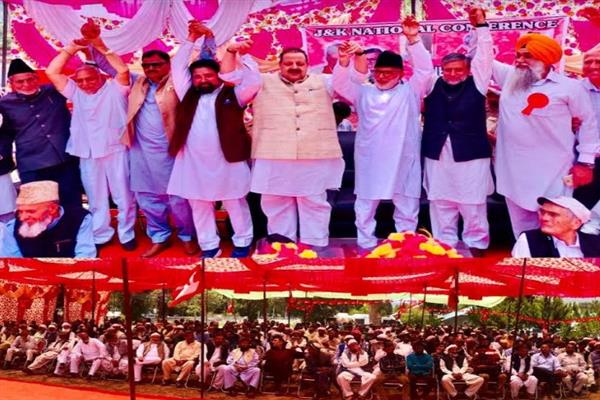 Srinagar: Senior National Conference leaders on Thursday cautioned against the “machinations” being engineered to weaken the National Conference, a bold voice of the people of the state and a binding force between the regions and the communities living in harmony for centuries.

“To achieve their malicious agenda, anti-people and anti-poor elements are being encouraged to cause divisions and wedge between the people, he said while exhorting the cadre to remain vigilant against their nefarious designs,” senior party leader, Ali Mohammed Sagar said while addressing senior functionaries and delegates of Mendhar, Surankote and Poonch here this evening.

The General Secretary called for further strengthening National Conference at the grass roots level to meet the challenges facing the state. He said the recent victory in the parliamentary elections reflects the urges of the people to have a strong government which can uphold the political aspirations and undertake holistic development across the state with equal opportunities of progress to all. He exhorted the cadre to get prepared for the assembly elections, whenever held in near future.

“In the midst of myopic politics based on religion, National Conference stands tall for its unflinching commitment to secularism and single entity of the state”, Sagar said while recalling the crucial role played by the party before and after 1947 in promoting and sustaining Hindu, Muslim, Sikh, Bhudist and Christian Unity.

He also pledged to foil conspiracies being hatched to fiddle with the special identity and singular entity of Jammu and Kashmir.

“Those nurturing wild dreams of trifurcating the state or tinkering with its special status are destined to fail, as the people of Jammu, Kashmir and Ladakh are determined to frustrate all their attempts with their full might”, Sagar said

Emphasisng the need for closing ranks and girding up loins for the assembly elections, Provincial President Devender Singh Rana said National Conference is all set to script a historic victory and forming the government on its own.

“National Conference alone can steer the state to peace and prosperity”, Rana said, adding that the people of the state have made up their mind to have a stable government that can end the era of developmental and administrative inertia of the past few years. To achieve equitable development of all the regions and their sub-region, setting up of Regional Councils will have to be accorded top priority, he added.

Rana said the miseries inflicted upon the people of the state, especially those living in remote and far off areas call for a special dispensation in terms of employment, development and economic emancipation. The successive National Conference governments have set a high standard of performance. While the government led by Omar Abdullah laid strong developmental edifice with thrust on employability, Dr Farooq Abdullah government between 1996 and 2002 put the state on the path of normalcy. Over two lakh jobs were provided during that period, he said, adding that the entire developmental edifice across the state witnessed transformation under the dynamic leadership of Sher-e-Kashmir Sheikh Mohammed Abdullah.

Addressing the workers, former minister Mian Altaf Ahmed spelt out the initiatives taken by National Conference for the upliftment of marginalized segments including Scheduled Tribes, Scheduled Castes, OBCs and other weaker sections of the society.

“National Conference has been an umbrella of poor, who got empowered, be it the revolutionary land to tiller or devolution of power at grass roots level to involve them in the decision making”, Mian Altaf said and stressed the need for generating massive awareness about the policies and programmes of the party.