Jammu: Two persons including a teenager girl was killed while 26 suffered injuries in separate road mishaps on Friday in Doda and Kishtwar districts of Jammu and Kashmir.

Two people were killed while one sustained injuries when a car they were travelling in skidded off and plunged into a river in Kishtwar district.

Police said that the car was on its way from Jammu to Gandoh when the accident took place near Machi Pal. 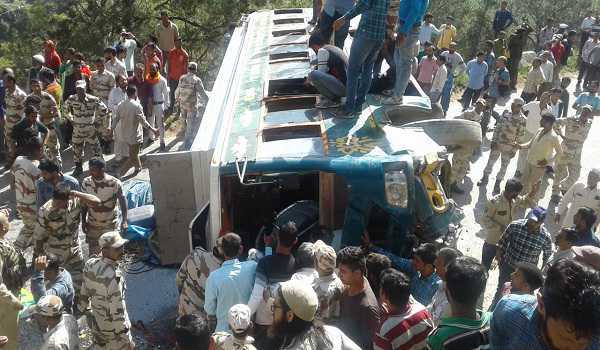 The deceased were identified as Dhuni Chand, Naveen Manhas, (18), daughter of Ramesh Manhas of Cheli, Gandoh while injured was Shreya Thakur.

In another incident, 25 passengers were injured when a bus they were travelling in met with an accident and turned turtle in Doda district.

Police here said that a bus was on its way from Gandoh to Jammu, this morning at around 0900 hours met with an accident and turned turtle near Petrol Pump in Ghadsoo.

“At least 25 passengers travelling in the bus sustained injuries,” police said adding that they were rushed to the District Hospital, Doda.