Army rescues 81 tourists stranded due to landslides in Ladkah

Srinagar: As many as 81 tourists, including women and children — who were stranded due to multiple landslides following incessant rain in a remote area in Ladakh region – were rescued by Army, a defence ministry spokesperson said on Friday.

Col Kalia said a total of 81 tourists, including women and children of different age groups, got stranded between Changmar and Bukdang villages in Siachen Brigade area of Fire & Fury Corps due to multiple landslides on road between Pratap Pur and Turtuk villages on Wednesday. 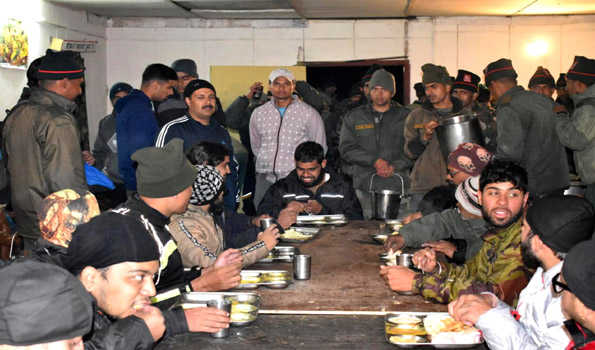 ‘The stranded tourists, who were visiting Shyok region, were trapped in the area with no habitation,’ he said.

Col Kalia said assessing the gravity of the situation, troops of the Fire and Fury Corps immediately swung into action and launched relief operation on humanitarian grounds.

‘The tourists trapped in the area were first rescued to safety and then provided warm clothing, shelter, medical aid and other administrative assistance in hours of need,’ he said.

He said the tourists were facilitated with safe and comfortable night halt at one of the Army posts in the area. ‘The distressed tourists expressed their heartfelt gratitude to Indian Army for this benevolent gesture and called the Army as Saviors in Times of Distress,’ he added.