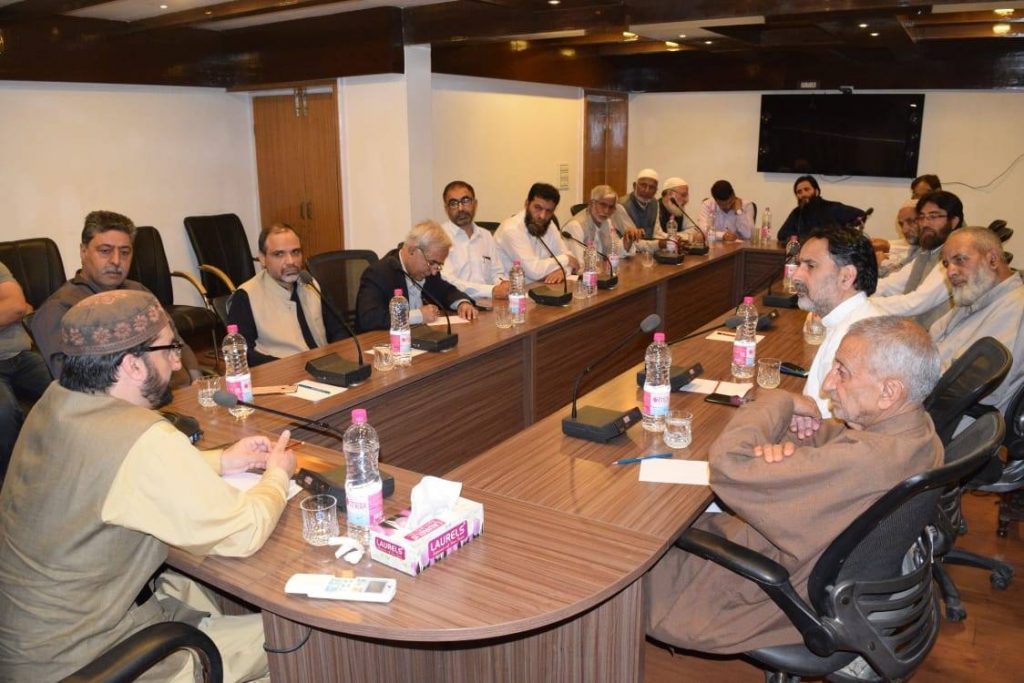 Srinagar: Asserting that the muscular policy adopted by New Delhi has failed in Kashmir, Hurriyat (M) has said that Government of India should acknowledge the people’s aspirations and work towards the resolution of Kashmir.

This was stated during the Hurriyat (M) executive, general council and the working committee meeting which was held at the amalgam’s Rajbagh headquarters under the chairmanship of Mirwaiz Umar Farooq in which Prof Abdul Gani Bhat, Bilal Gani Lone, Masroor Abbas Ansari, Muhammad Musadiq Adil, Mukhtar Ahmad Waza and others participated.

The meeting deliberated upon the Indo-Pak relations in the backdrop of recently concluded elections in India and the formation of new dispensation at New Delhi and also the prevailing political situation in Kashmir.

With regard to the situation in the valley, the participants expressed serious concern and anguish over the ongoing bloodshed, CASOs and killings across the valley.

The meeting unanimously agreed that the muscular policy adopted by New Delhi towards Kashmir for the past decades has failed in resolution of the issue and will not yield anything even at present.

The meeting reiterated that acknowledging the aspirations of the people of Kashmir and working towards the resolution of the lingering issue by New Delhi was the best bet for improving the situation in the valley as well as for the larger interests of peace and progress of people in South Asia.

The participants said that the issue can be resolved by showing political will and wisdom and any approach in this direction will yield positive results and is the most effective way forward towards a resolution.

The participants of the meeting stressed that the upcoming SCO summit in Kyrgyzstan provides a good opportunity for the leadership of India and Pakistan to eschew bitterness and break the ice.

They said that people of the entire region and especially Kashmiri’s were hopeful that the leadership of the neighboring countries would utilize this opportunity to de-freeze their relationship and set the ball rolling for engagement towards resolving all pending issues including Kashmir.

The meeting appealed to both the countries to lift the ban and throw open their air spaces as the ban announced by them on their air spaces was taking a heavy toll on passengers traveling by air in both nations and causing them unnecessary hardships.