Barrackpore: At least two people were killed and three others severely injured when bombs were hurled at them late Monday night in the Kankinara area of West Bengal’s North 24 Parganas district, police said Tuesday.

The TMC claimed that the victims were supporters of the party and were targeted by miscreants hired by the BJP, a charge denied by the saffron party.

The two deceased were identified as Mohammed Mukhtar and Mohammed Halim, police said.

Three people have been arrested for their alleged involvement in the incident, they added.

State minister and TMC’s district president Jyotipriya Mallick alleged that the victims were targeted by miscreants hired by the BJP because they had voted for the ruling party in the state in the recently-concluded Lok Sabha elections.

BJP MP of Barrackpore Lok Sabha constituency Arjun Singh, however, rubbished the allegations, saying that the incident was the result of a family feud and has no connection with politics. 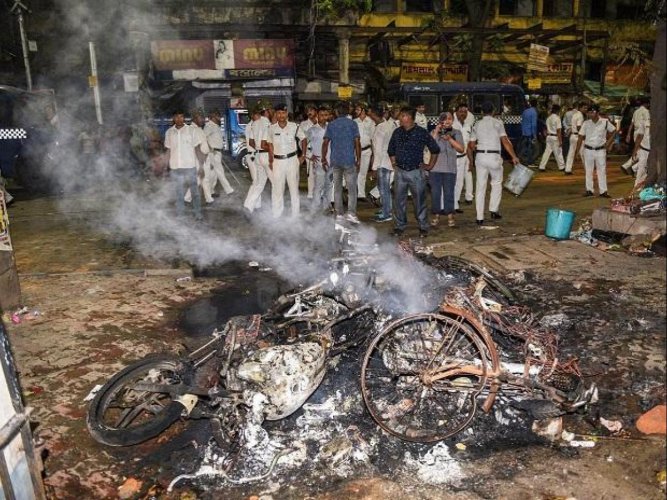 The incident took place on the intervening night of Monday and Tuesday at around 1 am in Baruipara, which is part of the Barrackpore Lok Sabha constituency, when family members of Mukhtar were sitting outside, officials said.

“Halim died on the spot, while Mukhtar succumbed at the hospital. A critically injured Mukhtar’s wife is undergoing treatment at a nearby hospital along with two others,” a senior police officer said.

Following the incident, a huge number of policemen, along with RAF personnel, have been deployed in the area.

When contacted, state ADG (Law and Order) Gyanwant Singh said he was collecting a detailed information about the incident.

Meanwhile, the BJP claimed on Monday night that a supporter of the party was strangled to death allegedly for chanting “Jai Shri Ram” by workers of the Trinamool Congress in the state’s Howrah district.

Though police confirmed the death of 43-year-old Samatul Doloi, whose body was found in a field in Sarpota village under the Amta Police Station limits, officers were tight-lipped about the cause of the death.