AMRITSAR: The pro-Khalistani Sikh leaders on Thursday took up the issue of freeing Kashmir during the Operation Bluestar anniversary observed at Nankana Sahib.

In a viral video on the internet pro Khalistani leader Gopal Singh Chawla is heard saying that Sikhs would also struggle for the freedom of Kashmir. “We will snatch away our Kashmir and Khalistan”.

At Nankana Sahib, Pro Khalsitani Sikhs also displayed posters of Referendum 2020, that seeks separation of Punjab from India, on the main gate of Gurdwara Nankana Sahib, Times of India reported. 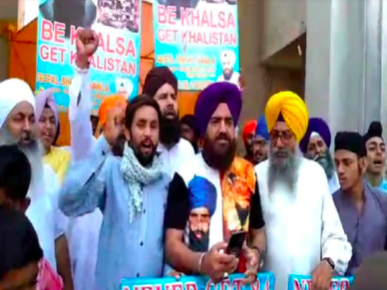 Chawla who is also Evacuee Trust Property Board member used expletives before camera against the then Indian prime minister Indira Gandhi who had ordered Operation Bluestar. “Sikhs took her to logical conclusion and all those responsible for the attack on Darbar Sahib will meet the same fate”.

Similarly, another Indian Sikh leader Gajinder Singh of Dal Khalsa uploaded a message on the occasion of Eid on his Facebook page greeting to Muslims especially to the Muslims of Kashmir whom he claimed were subjected to atrocities by Indian government, the report said.