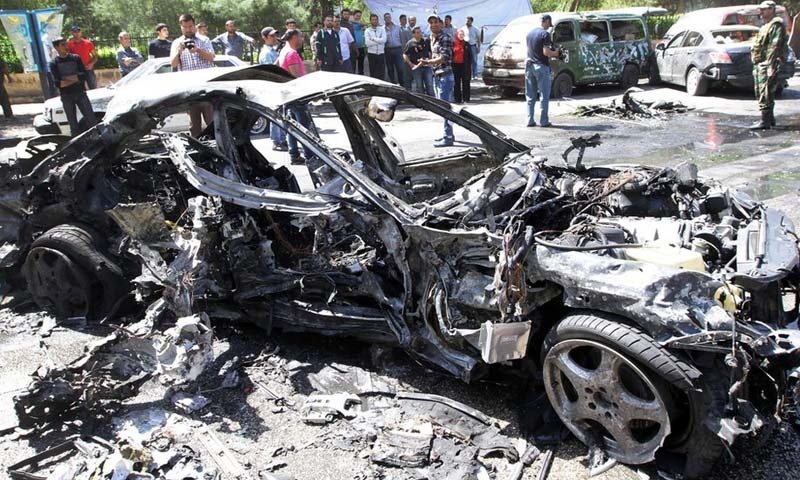 Jammu: In a major breakthrough, Jammu and Kashmir Police claimed to have busted the module of Hizb-ul-Mujaheedin and arrested five more militants terrorists involved in April 30 Car Blast in Banihal area of Ramban district to target the CRPF Convoy.

The IGP said that assistance of Special Operation Group Jammu was also taken and during the sustained interrogation of the Suicide Bomber by the specialised team of SOG headed by SSP SOG Sandeep Mehta and SIT members, the Police was able to bust the HM module which was responsible for the attack.

“On March 30, a car bomb attack was carried out by terrorists at NHW Tethar in Banihal following which a case was registered and investigation started,” police said and added that cordon and search operation was launched and the attacker namely Owais Amin, son of Mohammad Amin, resident of Vehil Shopian was arrested on March 31.

“The Suicide Bomber Owais Amin further revealed that he had been motivated by an active HM Commander Rayees Ahmed Khan alias Imaad Khan of Shopian and Omar Shafi to attack the security forces on the directions of the HM Chief Commander Riyaz Naikoo,” said the top cop adding that the car which was used in the blast was fabricated by Waseem alias Doctor, who was among arrested and some other terrorists.

“On the fateful day, he chose the target of CRPF convoy and detonated the car in which he was sitting but the explosion packed in the car only blasted partially and he survived with injuries,” said the IGP adding that he was apprehended while he was trying to flee back to Kashmir.

“Thereafter, on the disclosure of Wasim and acting on specific information another member of the HM Module involved in blast attack namely Hilal Mantoo, son of Gulam Rasool Mantoo of Chakora Pulwama (Kashmir) was arrested by a team of SOG Jammu from Central University Punjab where he was pursuing his PhD degree,” said Mr Sinha.

Hilal Mantoo during interrogation revealed that he was a close confidante of HM commander Dr. Saifullah who is operating in South Kashmir and who has motivated many youth of the area to join militancy.

He said that Mantoo during interrogation further revealed that the vehicle IED was fabricated by a group of terrorists including Waseem alias Doctor, Munna Bihari, a Pakistani terrorist of JeM, Shah Jahan of Pulwama and Sahil Abdullah along with him.

During his interrogation, Mantoo has also revealed that he is ‘rukun’ (member) of Jamaat-ul-Tulba which is the student wing of Jamat-e-Islami. Giving details, he stated that youth are taken into JuT after careful screening and once inducted given a extremely hard-line religious orientation and made to indulge in various activities including terror operations.

“Sahil has been missing from his house after the incident and possibly has become active,” he said and added that the Kashmir based officers especially IGP Kashmir, SSP Shopian and SSP Pulwama played a crucial role in this case in providing vital leads to the SIT members and played an active role in the apprehension of the members of this HM module.

With this arrest of Mantoo, the J&K Police has achieved a major success in thwarting the nefarious designs of the HM militant organization, said the Jammu Zone Police Chief. (UNI)