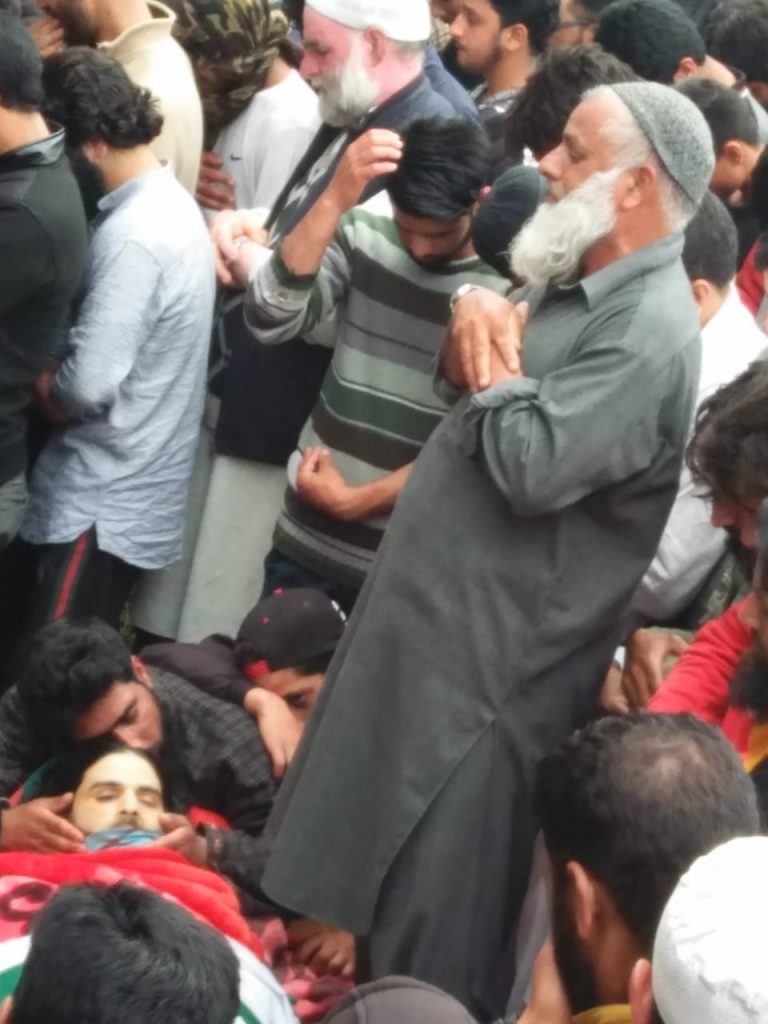 Bhijbehara:  Sadiq Ahmad broke down after caressing the grave of his militant son with his own hands.

Sporting a flowing white beard, Ahmad, a retired school headmaster, was murmuring, quite oblivious of the surroundings, as he was deep into the mourning of his son, Dr Burhan.

“Bae ha Lagai Balai (May life for you always),” he murmured in low voice and wiped his tears flowing through his eyes.

As Ahmad decided to leave for home, he screamed for the one last time;

“More than a friend, he was my friend”.

Ahmad’s son, Dr Burhan, was killed along with his accomplice during a nocturnal gunfight with army and police in BhijBehara area of South Kashmir.

Few men tried to console the bereaved father who stood close to the grave of his son.

When Ahmad left the spot, many people came close to hug him.  They patted his shoulders in an attempt to encourage him.

When the body of Dr Burhan was kept on podium, his sisters, father and relatives wept profusely and touched his face and long black hair with their hands.

On two occasions before, the news had spread that Dr Burhan was killed. But, locals said he survived on both occasions. This time, he did not.

As the news of his killing spread, despite the severe restrictions, people in large numbers, mostly the youth, from far flung areas like Budgam, Tral, Pulwama, kokernag and Kulgam managed to participate in his several funerals held for the Dr Burhan.

His father led all the rounds of the funerals himself.

Dr Burhan, 26, was born after the four sisters. He has also a young brother who is still studying.

The family said the slain militant was a very soft spoken from the very beginning of his life. He completed his Bachelor’s degree in physiotherapy from the CRC Bemina Srinagar.

The slain militant was also active in sports and had won many trophies that are still decorated in the Almirah of his room.

On June 24, 2018 he joined Hizbul Mujahideen militant outfit. He was killed in an encounter barely ten months of his joining the armed militants.

In all his addresses during the day, his father repeatedly said;

“I wished that my son will offer my funeral prayers but unfortunately, I have to offer my son’s funeral”.