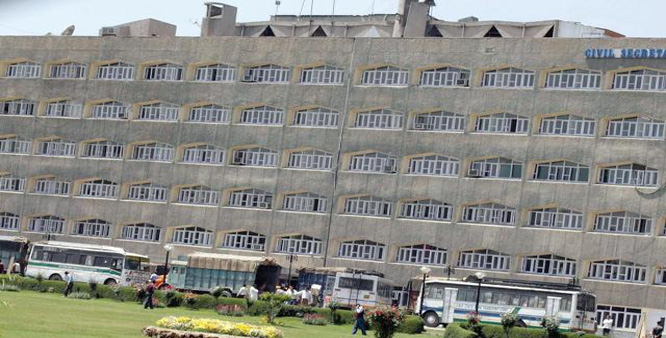 Srinagar: A meeting of the J&K Civil Secretariat Employees Coordination Committee was held on Tuesday to discuss and deliberate upon the various pending issues of employees.

The meeting presided by the Chairman Coordination Committee was attended by all the representatives of J&K Lower Grade Union, J&K E&S (NG) Employees Association, J&K Legislative Employees Union and others, a statement  said.

During the course of the meeting, all core pending issues concerning the welfare of the employees and the present scenario arisen out of the recent court directions were discussed threadbare.

It was observed that the government has shown cold response by not fulfilling its own commitments made from time to time during even number of meetings held under the chairmanship of Chief Secretary, J&K.

According to the statement, the Coordination Committee reiterated its demand and urged the government to fulfil its commitment by resolving the following long pending issues: “Allocation of slots to be notified and promotion from feeding services thereof; Inclusion of members of the J&K, Secretariat (Gazetted) Service –I & II as members of the J&K, Civil Secretariat Employees Association and extension of the term / tenure of the Union from 2 to 5 years; Revocation of SRO-202 of 2015; Cadre review and clarity about the future roadmap for the E&S cadre (PD&MD); Concurrence regarding Cadre review report of Legal Services by the Finance Department.”

“Promotion of Class-IV Orderly(s) of the Civil Secretariat as Junior Assistants and pay anomalies thereof; Enhancement of TA/ TMA and Medical allowances; Pay anomaly of J&K Legislative Employees. Settlement of all pending issues in the Estates Department.”

“Some of the defeated/self-styled leaders within the secretariat are taking undue advantage of the directions of the court and now sabotaging the above-mentioned issues on the directions of some KAS officers for their vested interests, and are warned to mend their ways henceforth,” the meeting observed, adding, “It will be the wholly and sole responsibility of the government in case some untoward incident takes places within the secretariat premises.”

The Coordination Committee also unanimously decided that in case the aforementioned issues are not settled at the earliest, the government machinery on the opening of the offices at Srinagar will be welcomed by the employees by wearing black armbands as mark of protest/resentment and also with the boycott of the opening ceremony of Darbar Move, the Committee said.

All employees are requested to remain united for the cause and make the future programme of the Coordination Committee successful, the statement said. (GNS)