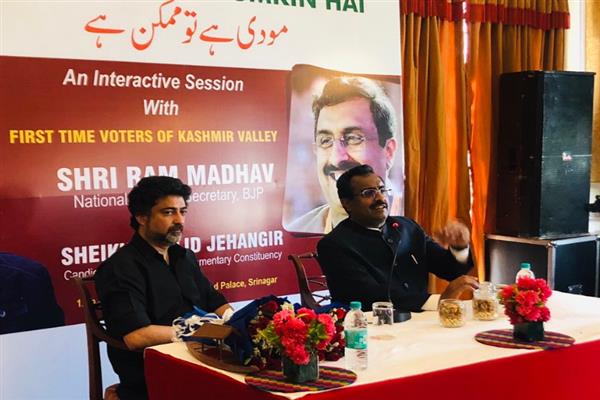 Srinagar: Bharatiya Janata Party (BJP) national General Secretary Ram Madhav on Friday interacted with the first voters in Srinagar and told them that casting ballots was the festivity of democracy.

Madhav who had arrived Srinagar for just an hour or two interacted with almost 200 first time voters in a hotel here and asked them to cast the ballots and elect the representative sensibly.

He told the first time voters that those who casted their votes in Kashmir so far were only being remembered during votes and are being forgotten after the elections are over.

Madhav has told them Khalid Jahangir who is party’s candidate for Srinagar Lok Sabha polls was the second Narendra Modi in Kashmir.

Later, Khalid also lashed out at the regional parties here for betraying the people every time.

BJP’s candidate for Srinagar LS constituency also said that he will try to end the sufferings of people if he is voted to power in the elections.