At Manan Wani’s village, most people stayed away from polling booths, others voted for ‘change’ 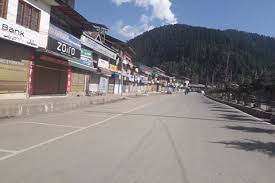 Srinagar: A large number of people stayed away from polling booths in scholar-turned-militant Manan Wani’s village in this north Kashmir district and most of those who cast vote said they voted for change to “end bloodshed.”

There were four polling booths set up in the Tikipora village and the one (booth no. 10) where Manan’s family was among listed voters saw lowest turnout of 12.30% with 96 out of 780 electors turning to cast their vote.

“We want change. I’m 70 year old. The boycott did not yield anything. We want to send somebody to represent us who will alleviate our sufferings and help end bloodshed,” said Sanaullah Ganie.  “We need development also. We belong to far-flung areas and there is need for development which would be ensured by better representative,” he said.

Abdul Samad, another resident of the Tekipora said the main reason for him to cast vote “for a person who will ensure end to bloodbath.”

Manan, a commander of the Hizbul Mujahideen, was killed in encounter with government forces his in Kupwara district in October last year.

The villagers of Saver village of Khurhama in Lolab, who boycotted the Panchayat elections last year, turned up in good numbers to cast their vote.

“We want change and main reason for us to cast vote is to protect Articles 370 and 35A” a youth, flanked by others, said.

“There are some parties who have malicious intentions. They want to sell Kashmiris but it is our responsibility to stop those forces and choose the right candidate who will save the Kashmiri identity,” he added. (GNS)