Stop beating everyone with the BJP stick, you are a BJP reject: Sajad tells Omar 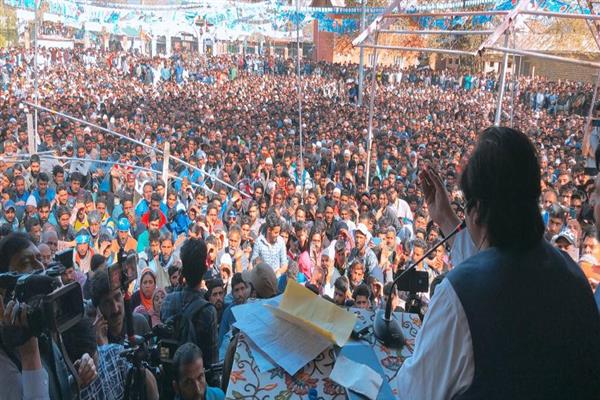 Peoples Conference Chairman Sajad Gani Lone on Tuesday claimed that Omar Abdullah met the top Bhartiya Janta Party (BJP) leadership after the 2014 elections for more than two and half hours and sought support to become the Chief Minister.

He was answering the question that he had put to Omar Abdullah in a rally at Kralapora yesterday.

“Omar Abdullah, after the 2014 polls, met the top BJP leadership for more than two and half hours in a high rise building at Connaught Place and sought support from them to form the government. The deal that he had offered them was for a rotational chief minister wherein he would be the CM for 3 years and the BJP would have their Chief Minister from Jammu for 3 years. However, the deal was rejected by the top BJP leadership.”

Sajad said that Omar, who has been beating everyone with the BJP stick, is in in fact a BJP reject. Let him rebut what we are saying.

“Omar has been accusing every political opponent of being close to the BJP. May I ask Omar that if he is so ideologically opposed to the BJP, then why did he meet their top leadership for more than two and a half hours? Why did he beg for their support to become the Chief Minister? He was he so desperate for their support that he was even willing to accept a Jammu’s CM for three years. However, his offer was rejected by the BJP leadership after which he has been beating everyone with the BJP stick. Had the BJP accepted his offer, he would have whole heartedly accepted the BJP and their demand for Chief Minister from Jammu,” he said.