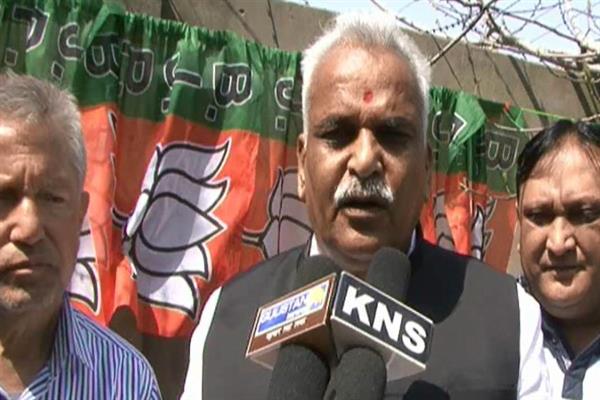 Srinagar: A top Bharatiya Janata Party (BJP) leader has raised questions over the withdrawal of security to political leaders in election time, terming it unacceptable and an attempt to increase vulnerability of politicians to militant threats during elections and also promised withdrawal of Armed Forces Special Powers Act (AFSPA) from Jammu and Kashmir after normalcy returns to the state.

Ramesh Arora, the sitting MLC and senior BJP leader, that withdrawal of security to political leaders in election time is increasing their vulnerability to militant threats during elections in Jammu and Kashmir and urged the Governor’s administration to take seriously BJP’s demand for restoring the security to political leaders after withdrawal by the government recently.

Asking National Conference vice president and former chief minister Omar Abdullah to go through the history of Jammu and Kashmir and bear in mind that his grandfather late Sheikh Mohammad Abdullah constituted a committee under the chairmanship of then minister Divedas Thakur which ruled out the possibility of withdrawing the central laws extended to the state, Arora said, “Omar Abdullah is trying to take a political mileage from his statements on restoration of the positions of Prime Minister and Sadr-e-Riyasat.”

Asking Peoples Democratic Party (PDP) president Mehbooba Mufti not to talk much about the Indian flag and instead do some introspection for motivating the people to take her party flag in their hands, Arora said, “people are leaving PDP at a very fast pace and hardly there is anyone to take the PDP flag in hand but there are many people taking Indian flag in their hands within and outside Kashmir. (KNS)