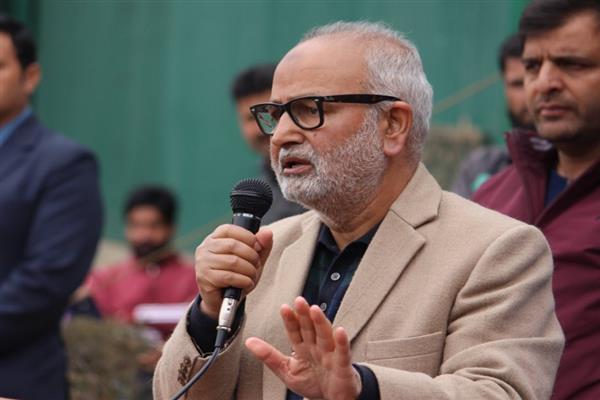 Srinagar: Reacting sharply to Finance Minister Arun Jaitley’s statement that Article 35-A is constitutionally vulnerable, Peoples Democratic Party (PDP) has said that the BJP is trying to convert constitutional relationship between Jammu and Kashmir and the Union into an occupation.

“BJP is trying very hard to convert legal and constitutional relationship between Jammu and Kashmir and the Union into an occupation through subterfuge and systemic subversion. It is unfortunate that Sangh Parivar has fielded one of the better known lawyers of the country to oppose the Supreme Court orders which have upheld Article-35-A not once but twice in the past,” said senior PDP leader and Former Minister Naeem Akhtar, adding it seems Sangh Parivar considers itself above the Supreme Court and That is why Mr Jaitley has chosen to patronizingly pronounce that Article 35-A is constitutionally vulnerable.

Akhtar said Mr Jaitley, perhaps, needs not to be told that the framing and the approval of the Constitution and its development is not an isolated event but it has a political constitutional history behind it which the Sang Parivar and some of their allies in the media try to overlook in pursuit of votes.

Stating that Sangh is selectively invoking history, Akhtar said that while they are re opening the files pertaining to the reign of Mughal king Babar in Ayodhya and digging up 500 year old graves, in case of Jammu and Kashmir they are not willing to have a look at the contemporary history which is an essential part of nation building in South Asia.

“The accession by Jammu and Kashmir to the Union of India was perhaps the most exciting experiment in the formation of modern, secular and inclusive nation but unfortunately the Sangh Parivar and its ilk in other parties have from time to time reduced this relationship to an uneasy sufferance,” Akhtar said and added that accession has been degenerated virtually into a forced marriage through repeated letdowns, erosion of authority of the state and deception.

Akhtar said that Mr Jaitley should know more than anybody else about the laws of the state and that the Article 35-A is not in any way a hurdle in investment in the state.

“The state subject and land laws in Jammu and Kashmir have ample room for investment by non- state subjects whether in power sector, tourism, industries or education. That is how most of the industrial activity in Jammu is run by non- state subject investors. Similarly, there are joint ventures with top brands in hospitality industry thriving in the state,” said the PDP leader.