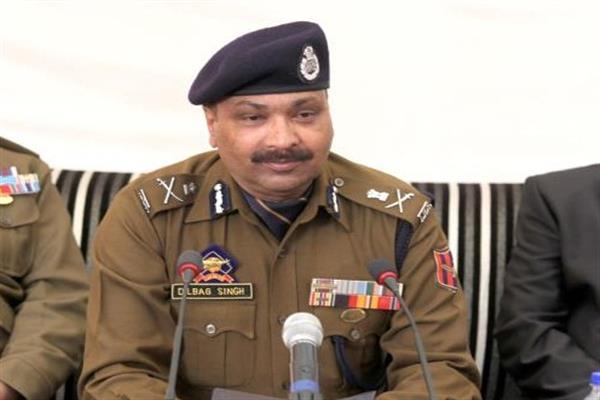 Srinagar: Jammu and Kashmir, Director General of Police (DGP) Dilbagh Singh Tuesday said the police department was all set to ensure the smooth conduct of Lok Sahba elections scheduled to commence from next month.

The DGP said that police and other security agencies are fully prepared for peaceful and smooth conduct of elections.

“Force are alert and will made all preparations for the LoK Sahaba elections. In case of sensitive areas, extra forces will be deployed,” the DGP said.

Singh further said that the state police will also ensure security of all the candidates and poll officials during the elections.

He said that the priority would be to hold violence-free elections and all possible measures will be taken for this. “Police force and the intelligence wing have been kept on alert to combat any threat,”

The DGP said that all the arrangements are being made, so that the polling process is not affected and the people can exercise their voting rights without fear.

“The security of candidates, polling personnel and polling booths will be taken care of. Special patrolling will be carried out in the sensitive and hyper-sensitive areas,” he said.

“I can assure from the point of the police and the sister security agencies that we are on the ground and we are set to ensure that there is a peaceful election. Any attempt to vitiate the electoral process would not be allowed” the DGP maintained.

The DGP stressed on greater synergy among different agencies deployed to be for election duties, saying that the coordination among all stakeholders would help to prevail a conducive atmosphere for the people to exercise their franchise.

Singh said that Jammu and Kashmir Police (JKP) has a rich experience in conducting the electoral process and the force along with other sister agencies would leave no stone unturned to conduct the election in a congenial atmosphere.

DGP asked all the police forces to adhere the guidelines circulated by the Election Commission of India strictly.

“I am sure elections will pass on successfully and peacefully. I wish my officers on the ground all the very best. Given the past experience of JK police, they have sailed through difficult times and I am sure that the major event (polls) will be successful.”  (KNS)