The joint session of the Parliament strongly condemns the blatant Indian aggression on February 26 and 27, 2019 which is completely in violation of the United Nations charter, international law and inter-state laws, the resolution read, Geo TV reported.

“It rejects India’s self-serving and fictitious claims of having destroyed alleged terrorist camps and caused heavy casualties. The facts on the ground clearly contradict India’s false claims and have been testified by independent observers.”

“The resolution condemned India’s baseless allegations in the aftermath of Pulwama attack which were politically motivated, and recalled the statements of all political parties and the prime minister offering Pakistan’s assistance to India after the incident. 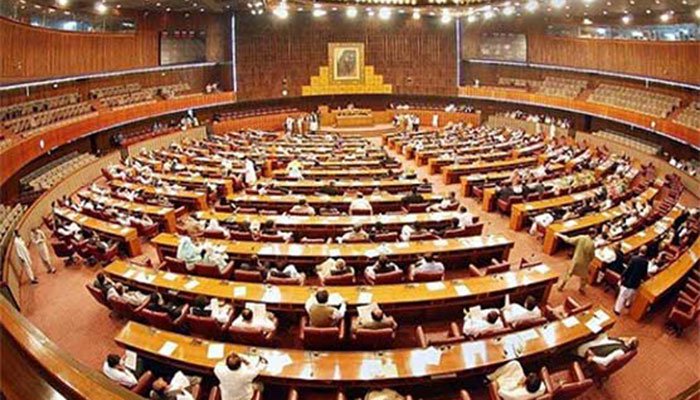 “It emphasised that India’s reckless actions impaired the peace and stability of the region, while endorsing the National Security Committee’s decision to respond to Indian aggression at the “timing and place of its own choice”.

“Further recalling the statement issued after a special meeting of the National Command Authority where Pakistan made clear that India had committed aggression, the resolution reaffirmed that the entire Pakistani nation stands united behind its armed forces.

“It reaffirmed Pakistan’s resolve to respond effectively in a befitting manner to India’s aggression as illustrated by the Pakistan Air Force on February 27, and called upon the international community especially the UNSC to condemn in unambiguous terms India’s highly irresponsible act endangering peace and stability in the region.”

The resolution welcomed strong condemnation by the OIC’s Kashmir Contact Group of the “brutal killings”, LoC violation by Indian military on February 26, but noted with deep disapprobation that after India attacked Pakistan, a founding member of OIC, Indian foreign minister was invited as a guest of honour at the OIC meeting.”

The resolution also strongly condemned the attacks on Kashmiris in Kashmir and the mass arrests of Kashmiris and Hurriyat leaders, and rejected India’s attempts to project Kashmiris’ right to self-determination as terror.

In conclusion, it echoed Prime Minister Imran Khan’s call to avoid further escalation and urged the Parliament of India to hold a joint session for de-escalation and dialogue between Pakistan and India.