Jammu: Hundreds of college students in Jammu boycotted classes and held protests in parts of the city on Tuesday, a day after a group of stranded Kashmir-bound passengers allegedly raised “objectionable” slogans.

The students alleged that the passengers raised “pro-Pakistan” and “anti-India” slogans and demanded that they be booked for sedition.

On Monday, a scuffle broke out between a group of students and some of the passengers outside the Gandhi Memorial Science College here, but timely intervention by police brought the situation under control. 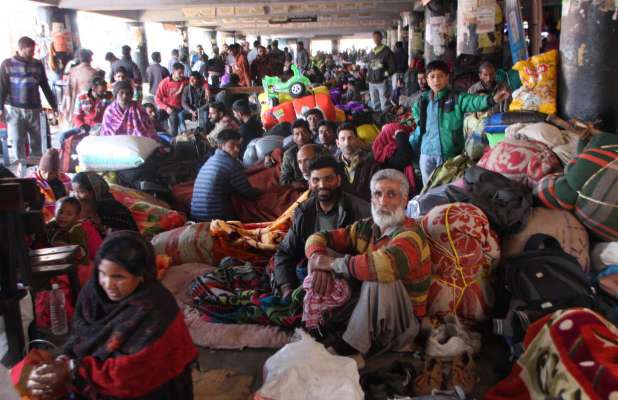 Students of various colleges in Jammu boycotted their classes and assembled in Canal Road, Jewel Chowk, Tawi Bridge and Bikram Chowk areas. They staged sit-ins on roads, which led to traffic snarls.

A students’ leader Vijay Chaudhary said a case should be registered against the stranded Kashmir-bound passengers involved in raising “anti-India” and “pro-Pakistan” slogans and they should be arrested.

This will not be allowed in Jammu, he added.

The protesters said they will continue to boycott their classes till action is not taken against those who raised the slogans.

Few hundred Kashmir-bound passengers, including students, have been stranded in Jammu as the Jammu-Srinagar national highway has been closed for the past seven days due to heavy snowfall and multiple landslides triggered by rains.

On Monday, they had come for registration at a hostel to be airlifted by the Indian Air Force to the valley, when they demonstrated outside the Gandhi Memorial Science College after blocking the Canal Road.

Senior superintendent of police, Jammu, Tejinder Singh, said action would be taken if anyone was found involved in raising “anti-national” slogans. (Agencies)