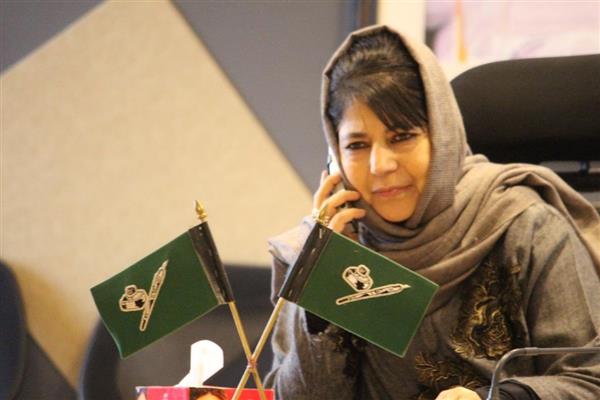 Srinagar: Peoples Democratic Party (PDP) President and former Chief Minister Mehbooba Mufti has cautioned the government of India that any tinkering with the special status of Jammu and Kashmir could turn the already strife-torn state into a veritable inferno and will bring more violence, chaos, and destruction.

Meeting scores of delegations in south Kashmir’s Anantnag on Tuesday, Mehbooba said that the emergence of the PDP in the state was like bursting forth of a new revolution and the party since its inception has been striving for people’s dignity and honor on all fronts.

She added that the state of Jammu and Kashmir as part of the republic secured its unique position and same cannot in any way be contested in any court of law.

“Article 35-A is a matter of life and death for us. No one has the authority to challenge the very identity of people of the state in any court across the world. It is high time that the central government should pass a direction, declaring Article 35-A off limits. This sword cannot dangle over our heads all the time,” Mehbooba said.

She said that those launching assaults on state’s integrity on multiple fronts shouldn’t live with the notion that they can any longer terrify people of Kashmir with such tactics. “These elements must understand that the attempts to dull our self-respect and turn us into gluttons have failed in the past and are bound to fail in future also. The central leadership should know that Kashmir is like a dry grassland with a blazing live coal in its midst. If the wind blew from a contrary direction, the situation in the subcontinent will further destabilize,” Mehbooba said.

She said that no battle is w0n by training the guns against the innocent people and instead of turning Kashmir into a theatre of war, the government of India must initiate reconciliation with Pakistan, dialogue with Hurriyat and declare armistice on the borders.

The PDP President stated that the core agenda of her party has always been to facilitate a political process and not just to form a government. “When for the first time PDP came to power in 2002, dialogue with the separatists was initiated. Prime Minister Vajpayee from Srinagar extended his hand of friendship to Pakistan and created history when he said that one can change friends but not neighbors. He even promised to resolve Kashmir within the ambit of humanity, opened the Srinagar-Muzaffarabad and Poonch-Rawalakote roads. There were also two rounds of dialogue between the Centre and the Hurriyat Conference and such confidence-building measures put the violence-infested Kashmir subtly back on the track,” Mehbooba said.

She added that when 2014 polls accorded a fractured mandate to all political groups of the state, PDP made an unpopular decision of forming the government with the BJP with a sole aim to get the state out of the era of uncertainty and chaos. “The party was hopeful that Modi would behave like Vajpayee but he didn’t and that was a letdown. When in November 2015, a rally was organized by the PDP for Modi, People had come on Mufti Sahib’s call to listen. However, Modi didn’t rise to the occasion and things started falling apart,” Mehbooba said.

She added that BJP ran away from the government last year only because PDP remained consistently firm on its agenda and refused to sign on the dotted line. Mehbooba remarked further that in spite of medley of internal troubles in the coalition, the PDP compelled the government of India to withdraw thousands of cases against the stone pelting youth, the Prime Minister Narendra Modi was made to announce a unilateral ceasefire with Pakistan and offer dialogue with Hurriyat.