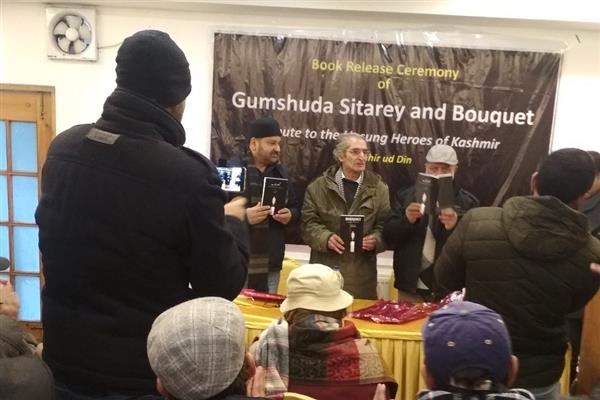 Srinagar: Journalist Zaheerudin’s book, “bouquet”, was released during an impressive function held in a local hotel in Srinagar.

A galaxy of people including academics, civil society activists, journalists and people from other walks of life participated in the function.

Human rights defender and senior Advocate Parvez Imroz, while releasing the revised edition of Bouquet: A tribute to unsung heroes of Kashmir and Gumshuda Sitare by senior journalist Zahir-ud-Din, said that remembrance is our only weapon to sustain the movement.

While hailing the author for his efforts to compile the book on unsung heroes, Imroz said that a similar book was “needed to expose the collaborators as well”.

The author in his speech paid glowing tributes to the memory of the unsung heroes saying they offered resistance and sacrifices for the cause.

The Bouquet, according to the author, comprises brief profiles of 90 persons who fought Dogra oppression and participated in the struggle post partition of the sub-continent. Five unsung heroines have also been included in the books.