Washington: US President Donald Trump and First Lady Melania on Wednesday night made a surprise visit to Iraq to greet American soldiers stationed in the country.

This is his first visit to Iraq as the US President.

“I want to come and pay my respects most importantly to the great soldiers, great troopers we have here,” Trump told a pool of reporters travelling with him. He stayed in the country for a few hours.

While in Iraq, Trump met with US military leaders and spoke to troops at the Al-Asad Air Base, a joint US-Iraqi military base west of Baghdad. A scheduled in-person meeting with Iraq’s Prime Minister Adil Abdul-Mahdi was cancelled.

Trump’s travel to Iraq was made public after he finished giving remarks to a group of about 100 mostly US special operations troops engaged in combat operations in Iraq and Syria.

When asked why he wanted to come to Iraq, Trump told reporters before a meeting with military leaders on base: “It’s a place I have been talking about for many many years. I was talking about it as a civilian”.

Trump travelled to Iraq unannounced during a partial government shutdown. 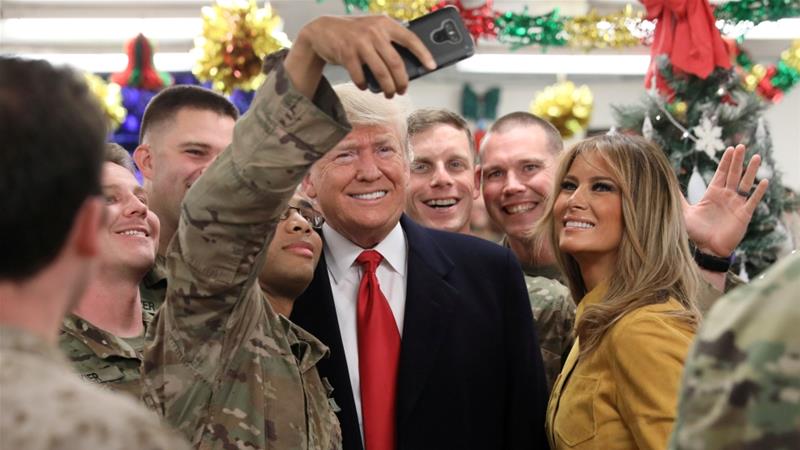 “We actually had a couple of set-ups but were cancelled for security reasons because people were finding out. Pretty sad when you spend seven trillion (US) dollars in the Middle East and going in has to be under this massive cover with planes all over and all of the greatest equipment in the world and you do everything to get in safely,” he said, expressing his dissatisfaction over the current situation in the region.

Responding to questions, he said that he had concerns about coming to Iraq.

“Sure. When I heard what you had to go through?. I had concerns about the institution of the presidency. Not for myself personally. I had concerns for the First Lady, I will tell you. But if you would have see what we had to go through in the darkened plane with all window closed with no light anywhere. Pitch black. I’ve been on many airplanes. All types and shapes and sizes,” Trump said.

After arriving at a dining facility at the base, Trump and Melania made their way through the crowd for about 15 minutes. Trump stopped to talk and signed several red ‘Make America Great Again’ hats service members had brought. At one point he signed an embroidered patch that read ‘TRUMP 2020’.

One man with the name SINGER on his uniform shook Trump’s hand. Trump turned to the reporters: “He came back into the military because of me,” Trump said. Turning to the man, Trump added: “And I am here because of you”.

Trump told reporters that he was pleased about his meeting with military leaders. He said they have a “great plan. You’ll see. I wish I could tell you”.

At one point, Trump stopped to talk football with a soldier named John Rader with the 201st Regional Support Group based in Atlanta, Georgia. Trump talked for a while about the Falcon’s football losses in recent years.

Trump also paused to take photos and selfies with many service members. At one point Kyu Lee told that Trump he was the chaplain for Seal Team Five. Lee recalled Trump telling him: “Hey, in that case, let’s take a picture”.

The hall was decorated for Christmas with bells, foil balls, twinkling red green and blue coloured lights, the tables were covered in red and green table cloths. There were snowmen made of stacked tires painted white and Christmas trees fashioned from cut two by fours.

As hundreds of troops in uniform cheered, Melania took to the microphone and gave holiday and new year greetings to them and their families.