Srinagar: Pakistan was tense on Thursday as countrywide protests against the acquittal of a Christian woman sentenced to death for committing blasphemy entered the second day despite Prime Minister Imran Khan’s warning to defiant hardliners.

Asia Bibi, a 47-year-old mother of four, was convicted in 2010 after being accused of insulting Islam in a row with her neighbours. She always maintained her innocence but has spent most of the past eight years in solitary confinement.

The Supreme Court overturned the conviction, a landmark verdict on Wednesday that sparked nationwide protests, death threats from hardline groups. She was set free after the apex court found that the evidence against her was insufficient.

Protestors led by Tehreek-i-Labaik Pakistan and other groups responded with anger and blocked major highways and roads in different parts of the country.

Traffic officials said major disturbance was witnessed in Karachi, Lahore and Islamabad where dozens of protestors were enforcing the blockade of major roads. Traffic was also suspended on major motorways due to the presence of mobs.

The largest province of Punjab, which was suffering major protests, announced to close down schools for a day and also cancelled supplementary examinations of Secondary School Certificate. 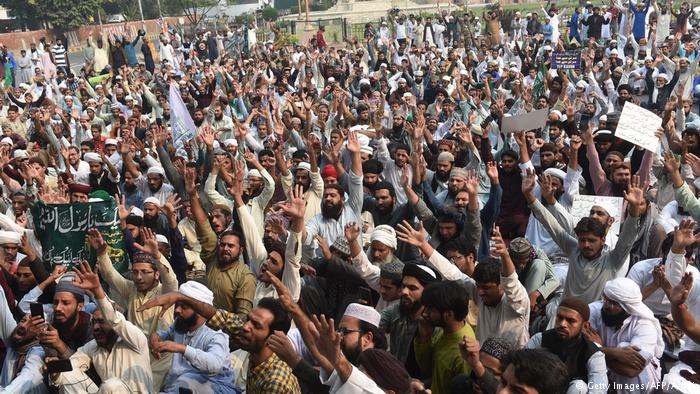 Private schools in Sindh and Khyber-Pakhtunkhwa provinces also announced to remain shut. However, educational institutions were open in Islamabad.

Hospitals were on high alert due to fear of clashes as police and paramilitary forces tried to contain the disturbance.

Long queues of traffic were witnessed in Lahore, Islamabad and other cities due to blockade of several major roads.

Mobile phone and internet services were also suspended in different parts of the country.

There was no official word on the plan to clear the mobs but security sources said all options were being considered.

“We are ready to take action and restore the writ of the state,” a senior police official told PTI.

Talking tough, Prime Minister Khan Wednesday told hardliners not to “confront the State” and refrain from vandalism after the Supreme Court acquittal of Bibi.

He addressed the nation through a video message and his address was solely focused on the Asia Bibi verdict.

Bibi was accused of committing blasphemy in 2009. She was convicted in 2010 by a trial court and her death sentence was maintained by the Lahore High Court in 2014.

She appealed against the conviction in the Supreme Court, which for the first time heard the case in July 2015.

Bibi’s case gained prominence when former governor of Pakistan’s Punjab province Salman Taseer was killed in 2011 for supporting her and criticising the blasphemy laws.

A month after Taseer was killed, Pakistan’s religious minorities minister Shahbaz Bhatti, a Christian who spoke out against the blasphemy law, was shot dead in Islamabad.

Critics say strict blasphemy laws have often been used to get revenge after personal disputes, and that convictions are based on thin evidence.

Dozens of people have been charged under the laws.

Though Bibi is being released, there is fear that she might be at risk of being attacked by militants.

In 2012, around 14 people were killed and scores injured when violent protests broke out over an anti-Islam and blasphemous videos circulated on YouTube.

There are fewer than four million Christians in Pakistan out of a total population of 197 million.

The vast majority of the population is Muslim, with Hindus being the biggest religious minority.