Unity, resistance, culture of politics within Muslim societies need of the hour: Scholars at ‘The Muslim Ummah’ conference

Istanbul: After profusely debating “fault lines and perils facing Muslim societies” for three days, over 20 international scholars came together on the last day of “The Muslim Ummah” international conference being held in Istanbul, and listed various recommendations for Muslims countries with focus on youth, institutional building and investments to move forward towards a better future.

The conference was hosted and organized by Centre for Islam and Global Affairs (CIGA) at Istanbul Sabahattin Zaim University (IZU)from Oct 14 to 16 in which around 20 speakers from around the world discussed challenges of secularism, sectarianism, colonialism and nationalism facing the Muslim world. 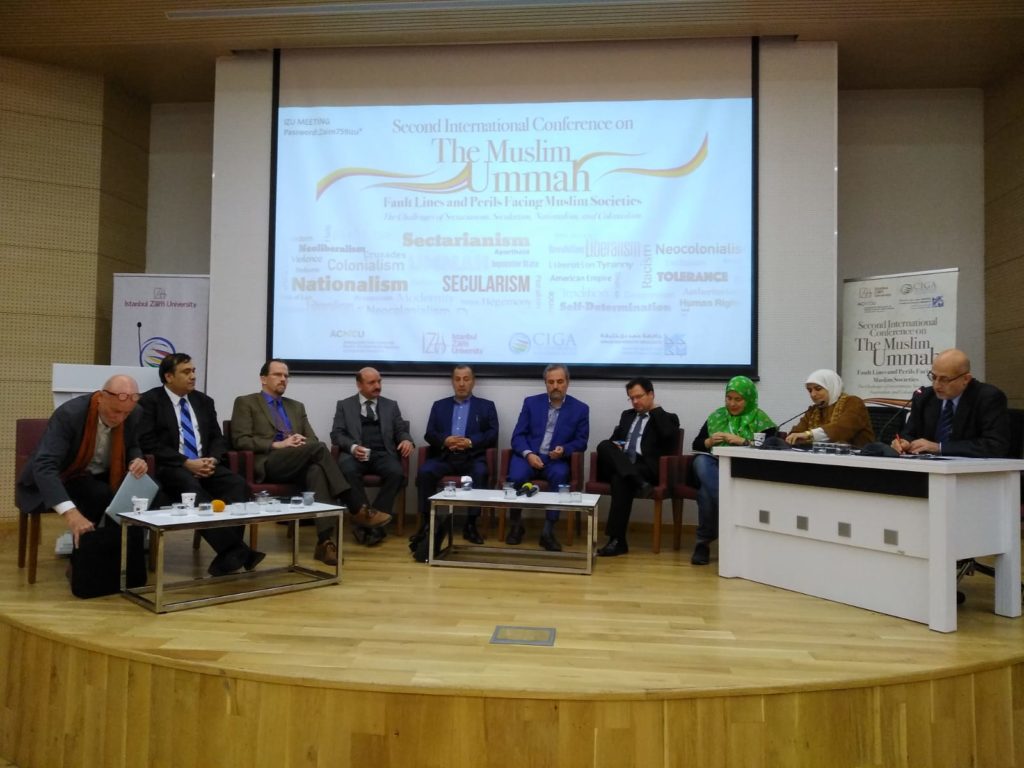 Director CIGA, Prof Dr Sami A Al-Arian stressed that unity and resistance among the Muslim societies with a culture of politics is need of the hour to keep colonial powers at bay.

Prof Ahmad Mousalli from American University of Beirut, Lebanon, said that Muslims need to put behind differences “as propping up divisions and differences are part of propaganda of some states”.

“Difference (in Muslim scholarship) is just difference in interpretation (of holy texts),” he observed stressing that “we should not let this further divide our societies”.

He identified as how Sunni community was used as “resistance against Shia community by certain powers” which results in victory of Zionist Israel.

In his power point presentation, Prof Arian, who is also a public affairs professor at IZU, explained how the geo-politics of the US and Israel have been colonizing much of the Muslim world.

The influence of Zionists in American circles is increasing,” he pointed towards the coming-in of Donald J Trump administration in the United States. “With (Jared) Kushner (Advisor to Trump) as central figure, (Benjamin) Netanyahu (Prime Minister of Israel) is partner in decision making of US policies (viz-a-viz Middle East).”

He, however, regretted that there are “Muslim Zionists as well”.

Prof Louay Safi of College of Islamic Studies, Hamad Bin Khalifa University Qatar, said that there are lessons to be learnt from Sunnis and Shias “but what we need is critical thinking from both the sides”. 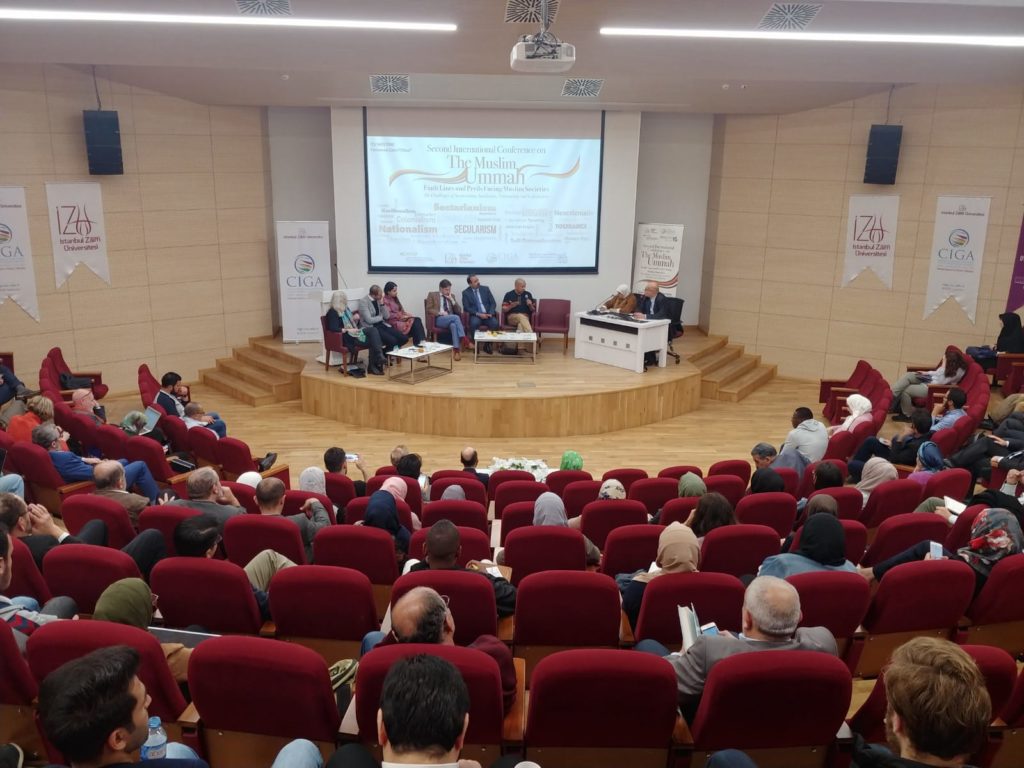 He referred to as how US supports the struggle launched by certain Gulf countries against Iran. “But many Sunni leaders thought Iran would be wiser (to understand the game) but it turned out to be different and what we see is fueling of sectarianism”.

He lamented that the Muslim intellectuals were “speaking to people instead of powerful states”.

Similarly, Prof Francois Burgat, from National Centre for Scientific Research (NCSR) France, said that there was no way-out from the division among Muslims than to go back to reconciliation.

“There is no military solution to any conflict,” he asserted referring to Yemen and said that platform for negotiations on Palestine-Israel conflict failed because Palestinians are not allowed to go back to their lands.

“Muslims are still discussing (petty) issues and they (external actors) divided us,” he lamented.

Prof Mehmet Bulut, Rector of the host university – IZU, said that it was first time that Turkey was following its aim and agenda for itself and the region.

“We have come a long way,” he said about Turkey’s progress in shedding IMF debt. He pointed out as how US, UK, France, Italy and Spain have had huge debtsthat are not even discussed.

Responding to this point of Prof Bulut, CIGA director, Prof Arian, stroke an interesting note. “It is ironic that United States can print its own currency time and again and we (other countries) can’t do so,” he said after explaining in his presentation as how US was filling its coffers after printing US dollars with impunity.

On the role of Turkey in the region, Prof Khan pointed out that “certain players including American Enterprise Institute and Foundation for Defense of Democracies did not like it and were pushing US state policy on it”.

“Their agenda is to rupture the Turkish-US relationship,” he said suggesting that Turkey should look towards other friends as well. “It is no longer a bi-polar world; there is China which sees Turkey as crucial for Belt and Road Project (OBOR) and Russia has been diligent towards Turkey as well.”

“Turkey should continue its relationship and work to bring peace in the (embattled) region,” he stressed.

Dr Nagihan Haliloğlu from Ibn Haldun University Istanbulsaid that there are no more informed secularists. “Secularism has been used as anti-Muslim and anti-migrant frame, but it is outdated now,” she observed.

Prof Şener Aktürk from Koc University, Istanbul, said that there was no history of Muslims in Europe and people need to focus on that as well. Besides, he said, there is a need of Europe-wide civil rights movement by the under-represented community.

However, scholars noted that there was fear in suppressed people in Europe and many of them were co-opted.

Carving out a model in Turkish president Recep Tayyip Erdogan led AK Party, Prof Louay Safi said that it was possible for Muslim political parties to embrace values of Islam and democracy and then implement them as well for the larger good of its people.

“Seminaries and Islamic schools don’t teach ethics, work ethics, what ethics we need towards our neighbors,” he said adding that Islam needs to be represented through public ethics. 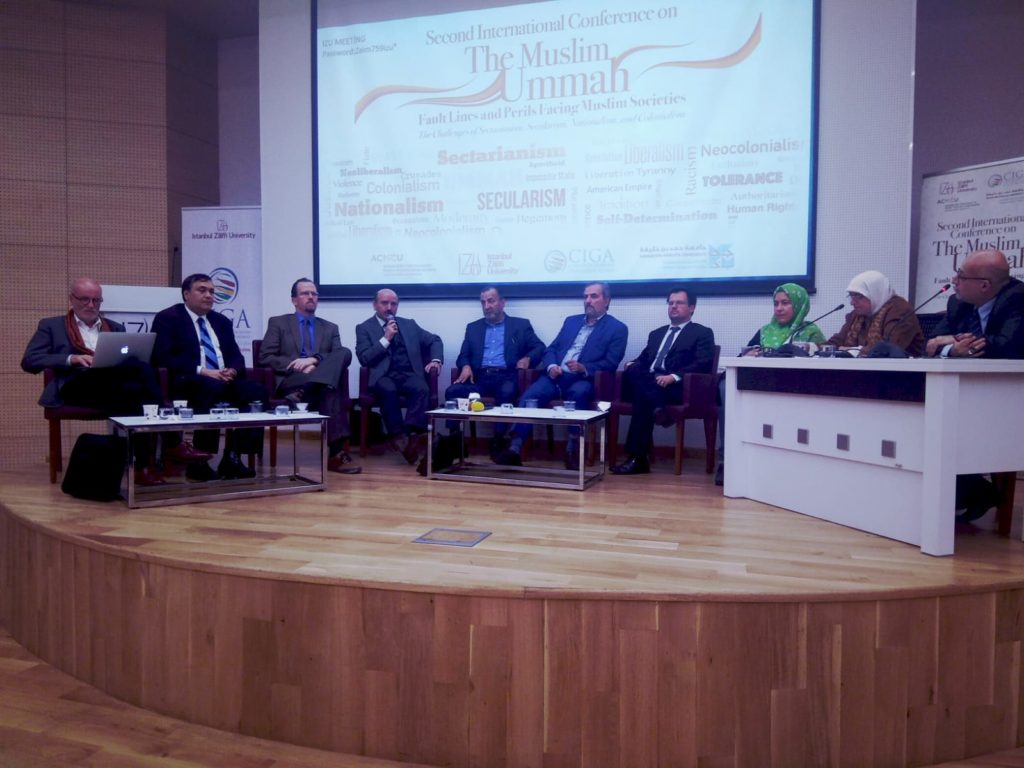 He stressed on support to activist-scholars among Muslim societies.

Expressing his support at institutional level, IZU Rector Prof Bulut said that what governments in Muslim societies can do is ensure free atmosphere for scholars, thinkers, universities.

“Needs of people have changed… what we can do is focus on our youth who is our future and do whatever job is assigned to us with best of our capabilities,” he explained.

Prof Burgat from NCSR referred to illegal detention of Oxford Professor Tariq Ramadan. “Treatment meted out to Tariq Ramadan is clear example of what France could not accept even before his detention,” he said pointing out to state of Muslims in the European Union country.

Claiming that “role of Ulema is gone”, Prof Mousalli said that Muslims need new scholars with organic production of knowledge and move ahead.

He cited Turkey as an example as how it learned from the past and is doing well while moving ahead. “We need to go beyond ‘too-much’ ideology,” he said. “Enough is enough… politics should not be primary thing but a mover to learn our civilization.”

Prof Farid Esack, from University of Johannesburg in South Africa, said that fundamental character of state “is that of the empire”.

“Challenge is that Muslims must understand in the United States that they are citizens of the empire,” he said, “Prophets (AS) are asked how to challenge the power and not to get in to the White House…”

Prof Safi said that Muslims cannot jump from their past. “We have to understand our past but look for a better future,” he said. “There is an urgent need of intellectual movement working with social movements in Muslim world.”

Voicing optimism and hope, Prof Bulut said that Muslims have huge resources, potential as well as a “great youth force”. “We have to represent who we are, our civilization, tradition as individuals, institutions, communities as well as governments.”

For success, Prof Bulut stressed, “Muslims need to connect our present to our tradition for a new future.”

He maintained as how Turkey was losing out its half of the energy by banning Hijab as women were forced to sit in their homes as they were not able to come out in open without their veils. “They were not allowed in schools nor were jobs given to them if they wore Hijab and the resultant was that we would lose half of our energy which is not a case now,” he said.

He said that in tradition of Islam lie “so many solutions” to the problems of Muslims. “The rise of West with the fall of Islamic civilization, God was kept out of life… life is based on reasons but now what we see is infightings, break-up in families, financial stress and social issues in Western culture because of this,” he reasoned.

Prof Joseph Lumbard of College of Islamic Studies, from Hamad Bin Khalifa University Qatar, said that Muslims have the capacity but “we need to get together and institutionalize it and create an intellectual vision”.

He regretted that Muslims lack scholars who would “produce very good papers in the light of our holy texts”.

Prof Mujeeb R Khan collaborated Prof Lumbard saying that the democratic politics, pluralization ways of being, modernity are therein Islam and “we just need to work and study them”.

Kashmiri-American academician, Dr Hafsa Kanjwal, from Lafayette College Pennsylvania, said that there was a global nexus to de-politicise Muslims. “There is institutional support and money to this project and Saudi Arabia, India, UAE, Israel are engaged in this and projects that include entrepreneurship as well are used to disempower Muslims.”

“We need to work against these strong forces but people who do so will have to sacrifice,” she added.

“We look up to them and we need to help and guide and make way for them,” Prof Ezzat asserted.

Supporting the argument, director CIGA, Prof Al-Arian concluded that Muslim societies need to empower their youth and women for a better and prosperous future.