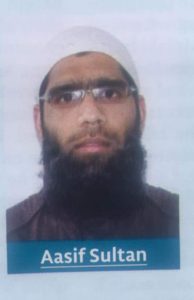 Srinagar: The police has said that local journalist Aasif Sultan was arrested after incrimnating was seized from him.

“The initial questioning of the accused, subsequent searches and disclosures made in the case so far have led to seizure of incriminating materials from various locations”.

“It also establishes his complicity for harbouring known terrorists involved in serious of terror crimes. Further investigation is of the case is going on.

The police said they have also filed a case against Aasif Sultan under FIR No: 173/2018.

They said Aasif is lying in the Police Station Batmaloo.

““We have learnt that Sultan is being questioned for his report on slain Hizbul Mujahideen commander Burhan Wani, published in a recent issue of Kashmir Narrator, along with other stories and has been asked to report his sources to police,” the journalist body said.

The family also denies that Aasif Sultan had any involvement with any militancy related case.