Srinagar: The latest report by the V-Dem Institute has drawn a grim picture of Liberal Democracy in India. The report draws on data from the academic survey which tracks nearly 400 indicators of democratic health.

The Varieties of Democracy (V-Dem) annual report was published a few days back. It produces the largest global dataset on democracy with some 19 million data for 201 countries from 1789 to 2017.

The report has been produced with the assistance of the European Union.

The report states that India during the last two years has seen a striking rise in the share of the world’s population living in countries backsliding on democracy and also claims that India is becoming part of, what it calls, Global autocratization.

“By 2017, one-third of the world’s population – or 2.5 billion people – lived in countries that are part of a global autocratization trend,”,  V-Dem reports.

The publishers say that for the very frst time, data from ‘Historical V-Dem’ is integrated – expanding the coverage to 228 years from 1789 to 2017. We are excited that the dataset now includes more than 200 political units and over 450 indicators and indices of democracy.

According to report the recent significant declines in a liberal democracy in India and the United States alone have aﬀected some 1.6 billion people, while less than 1 million people benefited from the improvements in Bhutan and Vanuatu.

“The countries with the largest population exhibiting a decline in 2017 are: India, the United States, Brazil, Russia, Democratic Republic of Congo, Turkey, Thailand, Ukraine, and Poland,” it says.

It further reads that the most populous democracy in the world, India, ‘is at risk’.

The report is  based on an in-depth academic survey involving over 3,000 scholars and other country experts. 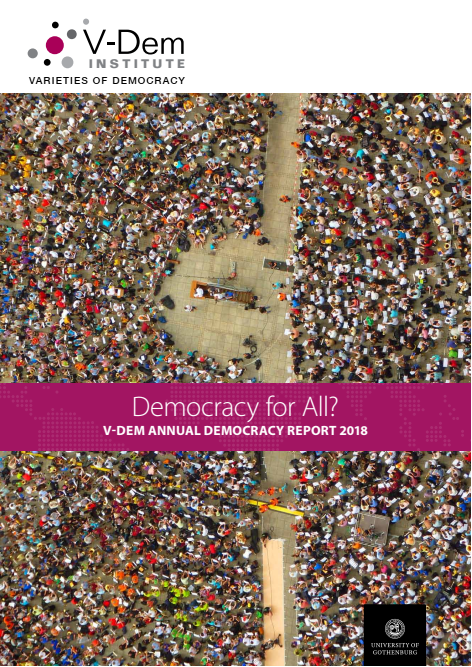 1: The report says that while multiparty elections continue to improve, but are at risk of losing their meaning

4: Political exclusion due to socio-economic status is making the rich even more powerful.

The V-dem report states that Indian democracy has declined significantly over the last decade and that the disquieting trend particularly concerns freedom of speech and alternative sources of information, civil society, the rule of law, and some electoral aspects.

The report, published yearly, also states that in India Law enforcement is gradually becoming less predictable and ‘that the state fails to eﬀectively protect its citizens from politically motivated killings.

“Harassment of journalists is also on the rise”

On the Freedom of Media, the report states that many journalists have been murdered or threatened for reporting critically on the actions of the ruling party.

On Elections in India, the report concludes that intimidation and violence have increased at polling stations.

“Party agents intimidate, harass and bribe voters, in eﬀect preventing them from casting their votes freely. Electoral violence includes deadly attacks against polling officials and voters on their way to polling stations,” reads the report.

In India, it says, the infringements on media freedom and the civil society activities of democracy following the election of a Hindu-nationalist government have started to undermine the longest-standing and most populous democracy in the Global South.