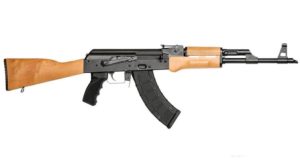 Reports said that the militants raided the police room guarding the Ex-senior congress leader Mohd Shafi Banday at Bunbazar, Shopian and decamped with the four Insas weapons from the cops.

The police said; “Terrorists in the evening hours tonight barged inside a guard post at Bona Bazar in District Shopian and managed to flee with four rifles from there. Search operation is underway in the nearby areas. The circumstances leading to the incident is being ascertained”.

“Initial probe suggests complicity of proscribed terror outfit HM in the incident. Police has initiated investigations into the matter”.