1700 candidates appeared in the physical tests 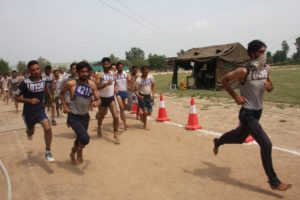 Srinagar: The recruitment for the post of constables in State Disaster Response Force(SDRF) under Transparent Recruitment Process has started at  RTC CRPF Humhama.

The police said Physical Endurance Tests (PET) of candidates from district Budgam were completed on the first day of the phase.

In all 2100 candidates from district Budgam were called for the physical tests out of whom 1700 candidates appeared.

The schedule for the tests will continue till July 23 in Kashmir province, the police said.