Many areas without power, decades old Kupwara bridge collapsed due to cloud burst 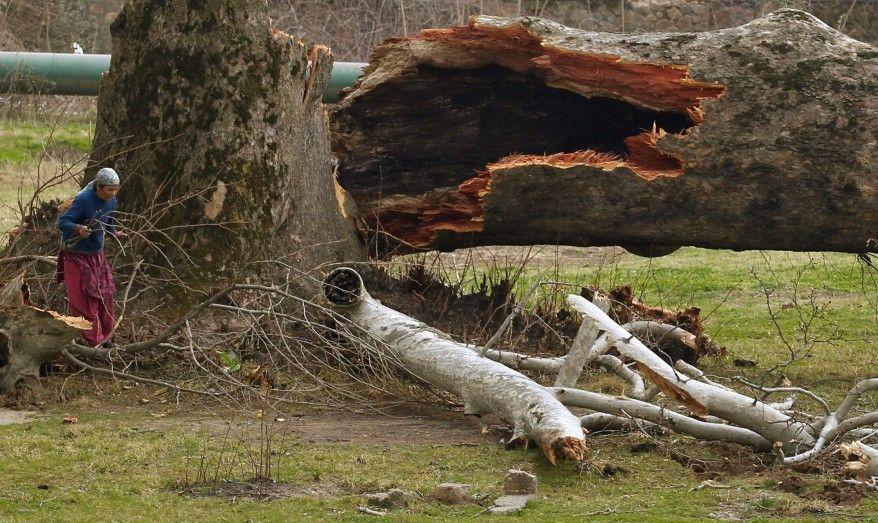 Srinagar: At least two persons were injured while as scores of residential houses, trees and cars were damaged after hail storms and powerful smashed parts of central Kashmir’s Budgam and Srinagar districts.

According to the authorities, two persons sustained injuries after the rooftop of Hanfia Complex at Kralkhud area of Srinagar city was blown away by the high powered wind storm.

The authorities said that scores of tents used by the Amarnath piligrims Pantha Chowk in Srinagar outskirts were also damaged due to the windstorm.

“All the piligrims putting up in these tents were immediately shifted to SDA Complex Pantha Chowk,” an offical said.

The winds with high intensity coupled with heavy rains also damaged a tin-shed and an electricity transmission in Munawarabad area of Srinagar city.

Reports said that several cars were damaged in Hazratbal, Habbak, Zakura and its adjoining areas after branches of many trees broke off due to the high intensity windstorms.

Some cars were also damaged inside the Kashmir University campus at Hazratbal after the branches of a Chinar tree broke off to the winds and fell on the parked vehicles.

Several rooftops of residential houses were blown away due to winds while as other buildings, shopping complexes and boundary walls of many structures also collapsed in sub-division Beerwah in Budgam district.

According to reports, the hailstorm damaged crops at various areas of the subdivision Beerwah while as the strong winds uprooted trees.

Reports said that many parts of Srinagar and Budgam are without power supply after rooftops of buildings were smashed, trees uprooted, power lines and poles toppled.

The bridge built in the 1950s over Hyhama river connects Kupwara town with Regipora area of the district.

A local resident of the area said that at around 2:40 am, the bridge collapsed due to the cloudburst.

Deputy Commissioner Kupwara Khalid Jahangir told reporters that the bridge was declared unsafe for traffic in 2008.

“The bridge was used only by pedestrians. Luckily, the bridge collapsed during the night when no one was using it,” he told reporters. (Global News Service)