“It (UN report) is indeed motivated — motivated by the desire to contribute to the search for peace and justice in Kashmir, and I urge you to read it in that spirit" 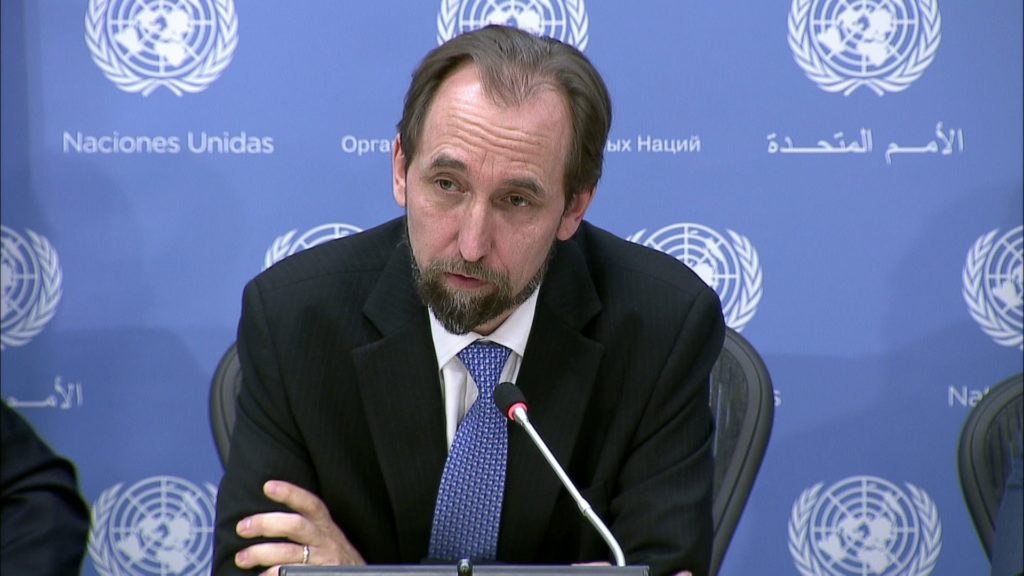 Srinagar:  UN High Commissioner for Human Rights, Zeid Ra’ad Al Hussein has stated that their recently released report on Kashmir is an attempt to break out of the political binaries on Kashmir and bring human rights issues in the region to the fore.

“Accountability for human rights abuses and violations cannot be indefinitely suspended while we wait for a political solution to Kashmir. If anything, adhering to human rights principles can help reduce tensions and prepare the grounds for a sustainable solution,” Hussein wrote in an article, titled “Listen to the voiceless,” in The Indian Express newspaper.

He said that his office has been seeking access to both sides of Kashmir since 2016 but India and Pakistan have repeatedly refused unconditional access.

“This cannot and should not stop us from talking about human rights concerns in Kashmir. It is my role as High Commissioner to speak up for victims. Our public reports seek to shine a light on abuses and violations, and ultimately to assist states and other stakeholders to identify and address human rights challenges — and so improve the protection of human rights of everyone,” he stated.

The United Nations High Commissioner has recently released a report on Jammu and Kashmir including Pakistani parts, and recommended formation of an international commission to probe the rights abuses in the region.

“What we have concluded from our remote monitoring of the situation in Kashmir is fairly clear. There exists a large deficit in terms of human rights protection and accountability on both sides of the Line of Control. This needs to be addressed urgently. This is why I am calling on the UN Human Rights Council to consider setting up a Commission of Inquiry to conduct a comprehensive independent international investigation into all allegations of human rights violations and abuses in Kashmir,” he wrote down.

He termed the reaction of the Indian authorities to their report as not only “disappointing but also puzzling”.

“Many of the facts presented in the report are from government documents and sources. For example, the numbers of civilians killed or injured since July 2016 come from the Chief Minister of Jammu and Kashmir as reported to the Legislative Assembly. Indeed, many of the issues the report details have previously been raised by Indian and international human rights experts, as well as government-appointed commissions and Indian civil society organisations,” Hussein wrote.

“What is deeply concerning is the culture of impunity for human rights violations that laws such as the Armed Forces (Jammu and Kashmir) Special Powers Act of 1990 (AFSPA) and the Jammu and Kashmir Public Safety Act of 1978 have fostered. How is it that a country that prides itself on its democratic institutions has not allowed a single trial in nearly 28 years of armed forces personnel accused of serious violations, including killings, rape, torture and enforced disappearances?”

UN high commissioner said that only free and fair trials can help find the truth in Kashmir.

“The victims and their families deserve to know the truth and if people are found guilty then they should be brought to justice in line with international standards to which both countries have committed. Subverting the process of justice does great harm to India’s democratic traditions,” he stated.

“The Indian government said that our report “ignored the pattern of cross-border terrorism emanating from Pakistan”. This is far from the case, as the report addresses armed groups and the human rights abuses they have committed over the years, including killings, kidnappings and sexual violence. The report also clearly cites the inclusion of LeT, Hizbul Mujahideen or Jaish-e-Mohammed in the United Nations Security Council Sanctions List, and we have not minced words about what they have done and from where they have derived their support”.

He said that UN was also monitoring the human rights situation in Pakistan-Administered Kashmir.

“The report raises concerns about the restrictions on freedom of expression, persecution of religious minorities and misuse of anti-terrorism laws to muzzle dissenting voices. The report found that there is tremendous pressure on independent human rights organisations and media in Pakistan-Administered Kashmir, which leads to self-censorship,” Hussein said.

“I urge the Indian government to have the confidence to look at the human rights situation in Kashmir and understand that the violations committed there have led to the alienation of the entire population of Jammu and Kashmir, particularly the young people. The people of Kashmir have repeatedly asked for justice and an end to the cycles of violence”.

He wrote that the Indian government rejected their report terming it as “fallacious, tendentious and motivated”.

“It is indeed motivated — motivated by the desire to contribute to the search for peace and justice in Kashmir, and I urge you to read it in that spirit” Hussein wrote.