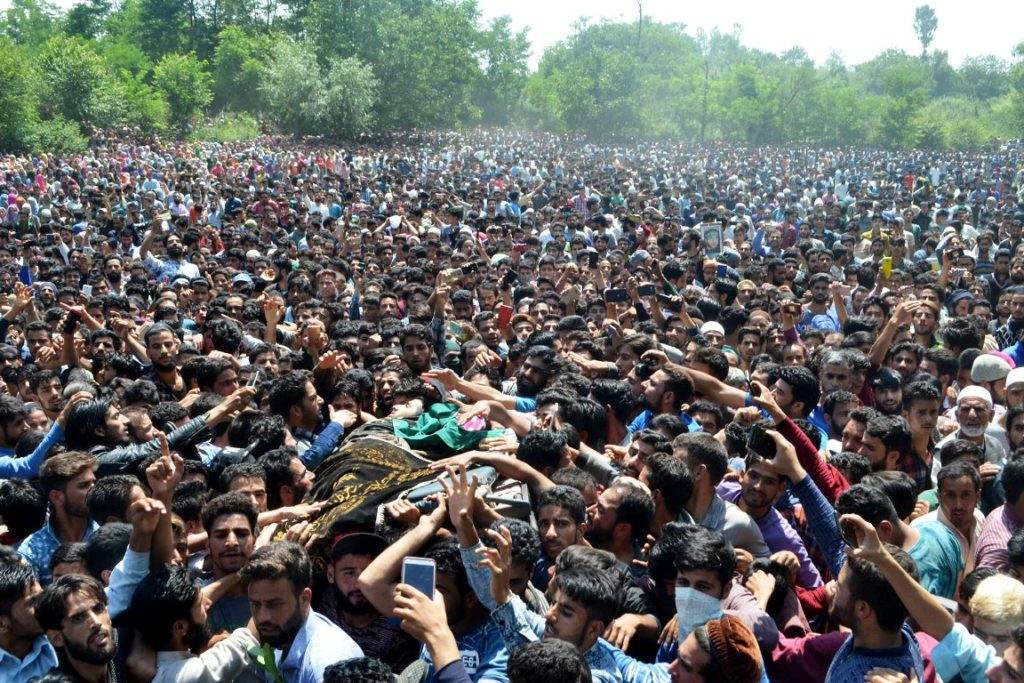 Srinagar: Tens of thousands of people on Monday participated in the last rites of Lashkar-e-Toiba divisional  commander Shakoor Ahmad Dar at his native Sopat-Tangpora village in Devsar area of south Kashmir’s Anantnag district.

Reports said that around six rounds of funeral prayers  were held since early morning for the slain at a ground in the village that has a capacity to hold over thirty thousand people at a time.

Dar was killed along with a foreign associate during a gunfight with the government forces in Qaimoh area of adjoining Kulgam district. His third associate was captured alive. A civilian was also killed during the clashes that erupted near the site of the gunfight.

Shakoor was a cleric and a ‘Hafiz’ (one who memorizes holy Quarn). He used to lead prayers at Jamia Masjid and Eidgah Masjid Soput.

Shakoor according to his family went missing on September 30, 2016. A couple of days later, his photograph along with an assault rifle went viral and police came to know he has joined militant outfit Lashkar-e-Taiba.

His two brothers Khurshid Ahmed Dar and Sartaj Ahmed Dar were in police custody when Showkat was killed in the gunfight, a local news gathering agency, CNS reported.

The wire agency reported that Khurshid was cancer patient and was arrested six months ago at Kund Kulgam when police claimed that a pistol was recovered from his possession. He is currently lodged at Joint Interrogation Centre Kehribal Mattan.

Family members told CNS that Khurshid was not allowed to participate in the funeral prayers of his brother Shakoor Ahmed Dar.

Sartaj Ahmed Dar, another brother of Shakoor is also in police custody.

Family members said that he has been released for four days and yet again he has to present himself before the police.