Jailed for eight years: Sideeq walks out free to find the world has changed

‘My nephew died, children got married, and grandchildren couldn’t recognise me’ 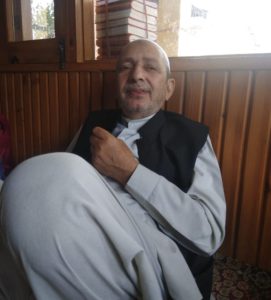 64 year old Mohammad Sideeq Ganai at his home in Sopore

Srinagar: Mohammad Sideeq Ganai, 64 is frail and sports a white beard. His body bears witness to the torments he suffered in the Tihar Jail.

“Those 8 years in Tihar jail felt like a hell,” Sideeq said while explaining his experiences as a prisoner.

As the prisoner walked free in early June this year as part of government’s amnesty, he said that everything has changed around him.

“The world around me has changed. It was a different world for me back then,” Sideeq said, who hails from north Kashmir’s Sopore town.

His four children were married while he also lost his nephew when he was inside the jail.

“My children got married during these years, how long would they have waited?”

Sideeq also said that when he stepped inside the house after getting released from Tihar jail, his grandchildren were scared of him.

“All of a sudden an old man enters the house. You are bound to be scared,” he explains as to why his grandchildren were surprised upon seeing him.

It was a long wish of Sideeq to see his children getting married.

“It disturbed me all the time that I could not attend the marriage ceremony of my children,” he said.

“More than that, the loss of my 27 year old nephew came as a shocker inside the jail. He was like my own son. He died too young. I came to know three days after his death that he died of an illness. It still breaks my heart that I was not here when he was in pain”.

Recounting the sufferings of his family, Sideeq said;

“All the time I was inside the jail, my son took care of the family. No one came forward to help the family. He got his two sisters married and took care of his family.  That is something I am proud of. One thing which depresses me is that our apple trade is in shambles”.

For his family, Sideeq’s imprisonment brought hellish times and a god given ‘trial’.

“It would always kill us from inside when we thought of our father languishing in jail for none of his crimes. I had to console myself, my sisters, and my mother. I am thankful to God for giving me the courage to stand up to the trial,” Sideeq’s only son, Abdul Majid, 33, told The Kashmir Press.

Recounting the days when he was taken into prison, Sideeq said it was on a cold January evening of the year 2011 when he was in the capital Delhi to offer condolences to his friend who had lost his mother-in-law.

Sideeq, then 56 years old, after consoling with his friend at Patparganj locality of Delhi, left his home to get into the car and drive back to the place where he was staying.

When he approached towards his car where his another friend was also waiting for him, Delhi Police Special Cell sleuths grabbed him by his collar and whisked him away to ‘special unit at Lodhi colony.

“It wasn’t a business trip at all,” Sideeq recalls.

“I had gone to pay condolences to a friend who I know from past thirty years”.

Sideeq said he had never in his wildest dreams thought he would land up in what he terms as Asia’s worst prison- Tihar Jail.

“It was 12th of January and my friend’s mother in law had passed away on first January. Since Hindus commemorate the 13th day after a person’s death as a day particularly for women to mourn, I and my other friend thought of going on 12th. But I never thought I would end up in jail,” he said.

For the first one month, he was detained in the special cell and later he was taken to the Tihar.

“It was horrible experience to be locked up in a jail cell,” Sideeq said

“For the first week nobody knew that we had been detained”.

Later, Sideeq came to know that he was arrested on charges of running a Hawala (illegal money transfer) racket presumed to be funding Hizbul Mujahidin.

Apart from him, the court framed charges against four accused men under various sections of the Unlawful Activities (Prevention) Act on March 3, 2012.

Sideeq said it was a horrible experience to be inside the Tihar Jail. He said apart from no bedding or sitting arrangements, the food given to prisoners was of so bad that despite being a sugar patient, his sugar levels never rose.

“Such was the quality of food that one would hardly eat anything. Hence my sugar levels remained under control,” he said.

Speaking about the treatment of Kashmiri prisoners by Tihar jail authorities, Sideeq said they are harassed and have to live under extremely suffocating conditions.

“The moment something happens in Kashmir, the harassment of Kashmiri prisoners starts in the Tihar jail. Our only crime is that we are Kashmiris. That is why even criminals are given a free hand to harass you inside the jail with tacit approval of authorities,” Sideeq said.

He maintains that he was innocent.

To prove his point, Sideeq said police charge sheet carried all the concocted information, even his location of arrest was shown wrong.

“There is no Phawara Chowk. There is also not any hotel near Radio Kashmir”.

“The law system is such it accepts the lie of police. Nobody trusts Kashmiris. Not the security agencies, nor the law.”