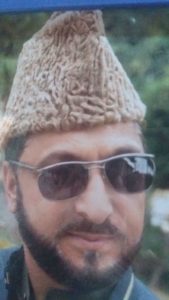 Srinagar: Grand Mufti (designate), Mufti Nasir-ul-Islam was detained by the police in South Kashmir’s Sanagam area  when he was on his way to Anantnag to commemorate the death anniversary of Qazi Nissar.

Grand Mufti, along with his delegation, were stopped by the police and later shifted to police station Sangam.

“I had to attend a martyrdom anniversary of Qazi Nisar,” Mufti said.

“I was the main speaker and guest of honour in a function organised by Mirwaiz south Kashmir to commemorate his fathers death. But, I was detained mid-way for reasons unknown to me”.

Grand Mufti continued to be under detention till last reports poured in.