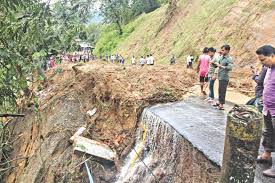 Srimagar: Three women were killed after their temporary residential sheds came under landslides triggered by heavy rains at Shasho Pader, forest area of Kishtwar in Jammu and Kashmir on Saturday.

Police sources said that eight persons of Bakerwal families got trapped after their residential tents came under at Shasho Padder area.

Soon after receiving the information about the incident, a police team was immediately reached the spot and retrieved all the eight trapped persons including three minor boys and two girls, the officer said.

All of them were immediately taken to Primary Health Centre Kerro where three young women were declared brought dead, the officer said.

He said that the five minor injured where referred to the district hospital for advanced treatment.

The officer said that the male members of the families had gone to offer the Zahur nimaz when the incident occurred.

The officer said the Bakerwals put up in these shelters during summers. They originally reside at Pathernaki, Kishtwar.

After conducting all legal formalities, the bodies of the trio were handed over to the families for last rites.