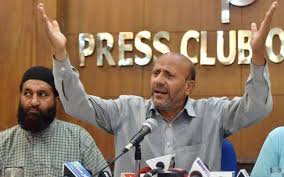 Srinagar: In reaction to a report released by the United Nations High Commissioner for Human Rights on Kashmir, legislature Er. Rasheed, said that the UN report “exposes atrocities in Kashmir by security forces.”

Welcoming the UN report on Kashmir, Er. Rasheed said in his statement urged upon “all concerned parties to introspect and uphold the human rights of people of Jammu and Kashmir on both side of the LoC.”

He also welcomed the acceptance of the right to self-determination of the people of Jammu and Kashmir in the recently released UN report.

He also said that the report has vindicated stand of all those who have been accusing Delhi and Indian armed forces operating in Kashmir of committing human rights abuses in Kashmir.

In its first-ever report, the UN accused Indian armed forces of “unlawful killings by using brute force, sexual violence against female-folk, use of one of the most dangerous weapons pellet-firing shotguns against civilian population.”

The UN report also urged India to respect “the self-determination of the people of Kashmir” to which the Indian Ministry of External Affairs said that “India rejects the report.”