Nobody is ‘thekaydar’ of the movement; Jamiat-Ahle-Hadees has not committed sin by demanding land from government: Mushtaq Veeri 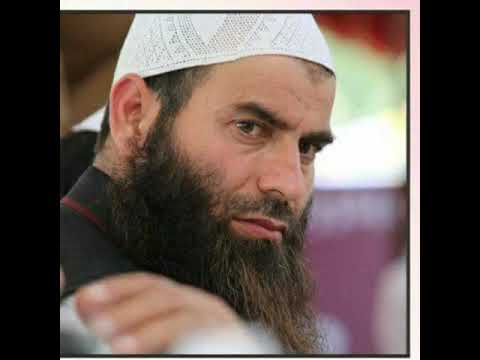 Srinagar: Firebrand leader of the Jamiat-Ahl-e-Hadees, Moulana Mushtaq Veeri, has defended the Jamiat’s decision to approach the government for allotting land for an Eidgah, and is trying to silence critics by stating, ‘nobody is thekaydar (contractor) of the movement.’

Veeri, who is known for his fiery sermons while speaking at religious gathering in uptown locality of Chanapora, Srinagar, said every jamaat (religious group) has 200 or 300 kanals of land for discharging religious activities. How come, only the Jamiat is accused of having committed a wrong by approaching the government for being allotted the same.

“It is our right to get land for offering Nimaaz collectively,” Veeri, who is also general secretary of Jamiat, told the gathering in an angry voice.

“We have not committed a sin. We are residents of this place. We also need a permanent place for Namaz.”

Veeri said that the Jamiat was always concerned at the beginning of every Ramadan about the location of the proposed Eidgah. 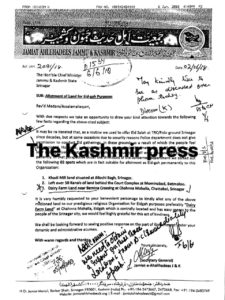 “We have to seek permission for praying Eid Namaz from the very beginning of the holy month of Ramadan, and then we are not sure if we will be allowed to pray,” he said.

Stressing upon the Jamiat members to show unity, Veeri said that the Jamiat demanding an Eidgah from the government has put the entire social media on fire as if it had done something grossly wrong.

He further said that the people were maligning Jamiat by name calling.

“Some call us agents, some call us informers. Are they ‘thekedar’ (contractors) of the movement?” he asks.

“Our contribution towards the struggle is visible like a blazing sun. We maintain Kashmir is a dispute and it will remain so. And our stand is that it should get solved through peaceful means. We don’t need a certificate from anyone to prove our allegiance to the Kashmir cause.”

Veeri was responding to The Kashmir Press news story which went viral on social media. 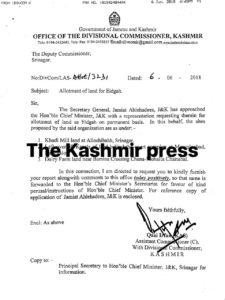 Instruction to officials to identify land for Idd gah

The report said that Chief Minister Mehbooba Mufti had issued strict instructions to officials to identify land to be allotted to the Jamiat-e-Ahle-Hadith on a permanent basis.

“The Secretary General of Jamiat-e-Ahl-e- Hadees, J&K, has approached the Chief Minister, J&K, with a representation requesting therein for allotment of land as Eidgah on permanent basis,” reads the order issued by the Divisional Commissioner, Kashmir.

Further defending the Jamiat for approaching the government, Veeri told the gathering that just for obtaining a permission to run a school, people lick the boots of government officials.

“When you have to register schools, we have to go from office to (government) office to get the work done,” he said.

“Accordingly, we also have to go and meet high officials to get things done. We can’t cover our eyes with a broom. We will construct hospitals. We have to construct the Transworld University. It is inevitable that our president will have to meet officials,” he said.

The firebrand Veeri said that no issue can be solved without the Jamiat being taken into confidence. He also urged cadres to show unity and to strengthen the Jamiat.