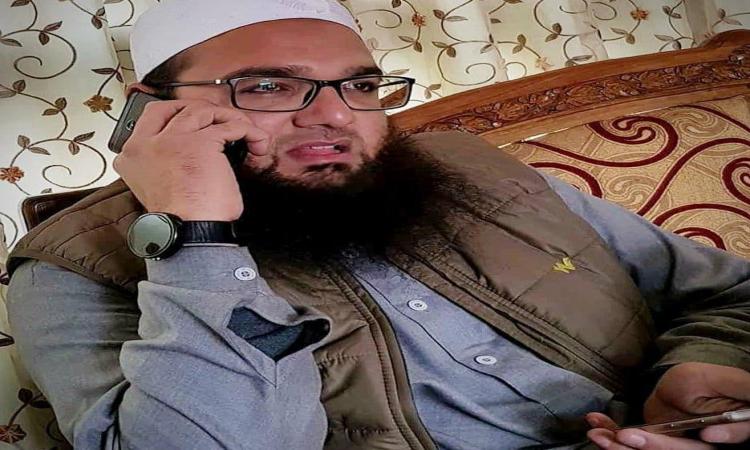 Srinagar: Abdullah Danish Shervani, who is accused of using domestic violence against his wife Mehnaaz Siddqui, has said that he had used Twitter to ask Home Minister  Rajnath Singh why his wife had been granted a visa despite him having requested the government not to issue her a visa in his name.

Shervani, who works as liaison officer at Kashmir University, said that he wanted to clarify how the visa was issued to his ex wife in his name despite his having divorced her in September of 2017.

“I wanted to meet him and ask why she had been issued a visa in my name despite me having divorced the lady in 2017, and after my writing to the Government of India in January 2017 to request that she not be issued the visa,” he told The Kashmir Press.

Earlier, Shervani had tweeted to both the Home Minister and the Minister for External Affairs Sushma Swaraj. “Ma’am, requested your help and guidance to major breach in MHA related to MEA. I am not bluffing. I am a responsible citizen with a genuine concern. Please guide me how I can reach out to you and Rajnath Singh ji,” he wrote.

His next tweet said, “Respectfully, matter of grave concern regarding lapse in your ministry of the level of breach of national security to share with you sir. If you don’t have time or interest, I could share it with Omar Abdullah, Rahul Gandhi, Republic, Zee News, Prannoy Roy NDTV, they could help then.” 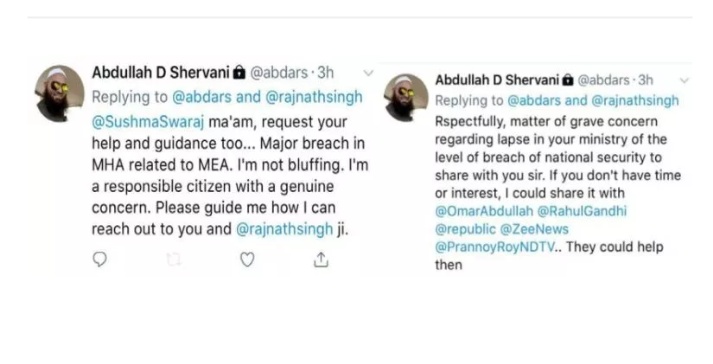 Tweets of Danish Sherwani which he later deleted

He later deleted the tweets. On being asked why he had deleted them, Danish told The Kashmir Press that he did it after realizing that he could not travel outside the state as he was prevented from leaving by the courts.

“I tweeted because the Home Minister was in Kashmir and I thought of meeting him. I deleted the tweets after the Home Minister had left the state, because after he was gone, I could not meet him as it would have been against the law. I am out on anticipatory bail. She has trapped me here,” he said

Sherwani stands accused of torturing his Pakistani wife Mahnaz Sidiqui but terms the accusations as baseless.

“All allegations against me are baseless. The cases against me are still pending before the honourable court. Let the court decide it. It is contempt of court to make public any deliberations by the court,” said Danish Shervani.

Shervani said that he was ready to face the courts, but that the current media trial against him was against the law.

“It is unethical and contempt of court to go public in the media with the same points because it has already been in the courts for the past four months,” he said.

“Let the courts decide. If I am guilty I will be punished, and if the allegations are baseless, I will be acquitted”.

Danish maintained that he had divorced his wife in September of 2017.

“She had consented to the divorce and written to me on Whatsapp, too.  She approached the Woman’s commission with an application for relief since I had divorced her,” he said

He also accused his wife of using morphed pictures about him, adding that if there is any proof against him. let it be published on social media.

Earlier, Danish’s wife Mahnaz Sidiqui had accused him of severe mental and physical torture. She had also accused Danish of attempting to murder her.