‘Paramilitary driver shifted gears to run his gypsy over me,’ says Younis who was captured in viral picture showing him under tyres of CRPF vehicle

‘I tried to save Qaiser, but could not’ 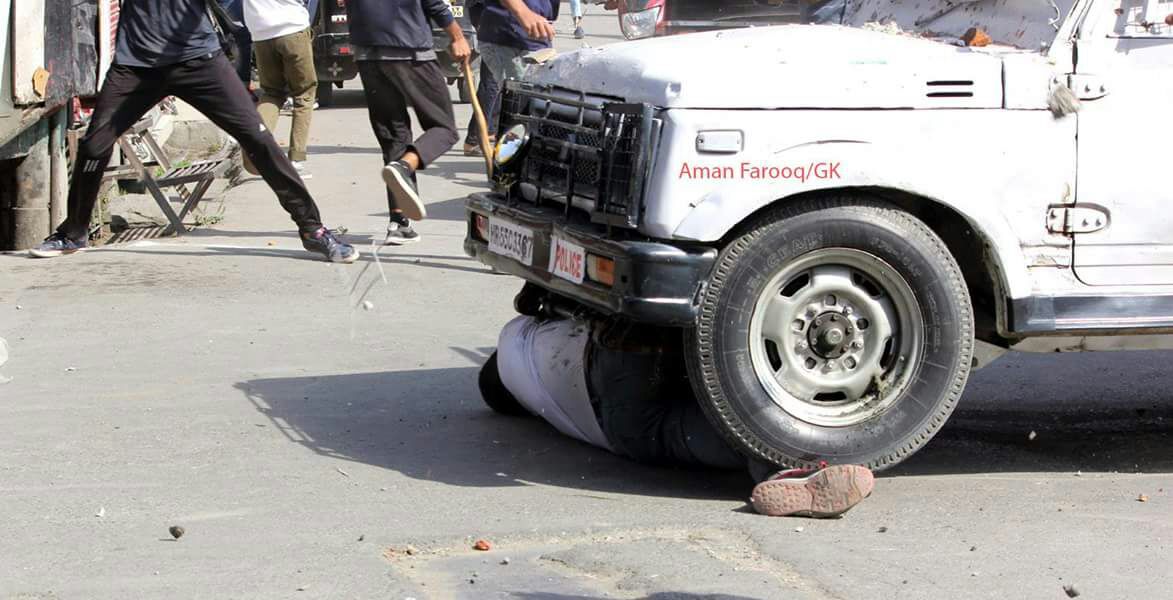 Srinagar: Last Friday, Mohammad Younis of Dalgate was mowed down by a CRPF vehicle at Nowhatta along with Qaiser Amin of Fateh Kadal.

Qaiser later died after fighting for his life for almost twelve hours.

Younis continues to fight for his life to this day.

His picture showing him lying under a CRPF vehicle’s tyre and gasping for air went viral on social media and lead to widespread condemnations across Kashmir.

Six days later, he is still struggling to recover while lying on a small bed at his three storey home in Srinagar’s  Buchwara area of  Dalgate.

With both his arms heavily bandaged and his face swollen like a balloon, Younis has only one thing to say, “Mia gow dham, (I feel as if I will suffocate),” he mumbles in a very low voice.

A fan set at its fastest speed is blowing air towards the injured Younis, who for the last six days has not been able to move an inch and is close to a vegetative state.

“He is still suffering severe trauma, despite us telling him that he is safely at home now. Younis acts as if something is weighing him down and preventing him from moving,” says Younis’s sister Sobia.

“He does not even allow us to wipe his beard after eating, such is the pain,” says Sobia.

“I once tried to wipe his face after a little soup spilled onto it, but he screamed as if a rock had hit him. Just try to imagine this kind of pain,” she explains.

Yousif suffered multiple contusions in his face, “He had poly-trauma and multiple lacerations on his head, face, arms, legs and chest,” a doctor wishing anonymity told The Kashmir Press.

“He survived because he is healthy and strong, and most of his injuries were flesh wounds,” he added.

The family members of Younis say the same.

“Qaisar suffered similar injuries, but since he was skinny, he could not survive the way Younis has,” says one family member.

Younis, who still has trouble speaking because of his pain, says he tried his best to save Qaisar, “Mia karay koshish, magar su bachio na, (I tried my best, but he didn’t survive),” he explains.

According to the family members, both Younis and Qaisar worked in the same company as marketing professionals, and on that fateful day Younis had gone to the Nowhatta market.

“On Fridays, he is assigned to Nowhatta and Soura.  If he had not gone there that day to seek payments from clients, he would not be in this condition today,” says Sobia with tears rolling down her face.

Younis recalled that at around 3:45 pm on Friday, youth gathered and started protesting near a famous cap shop at Nowhatta market.

It was then that a CRPF vehicle came from the direction of Khawaja Bazara and when it reached Nowhatta Chowk, protesting youth tried to stop it.

“It didn’t stop, and instead sped up and mowed down two youth. I immediately ran towards the vehicle to rescue them,” he says.

While doing that, Younis was mowed down as well.

“I was pulling out one of the youth from under the vehicle when its driver mowed me down and shifted gears to run over my body. Moving to and fro, the vehicle drove all over me. I cannot describe the pain when it happened,” he says.

His family members continue to look after him and pray for his speedy recovery.

Sobia says that she was feeling tense even hours before her brother was mowed down by the CRPF vehicle.

“My back was aching, and my heart was not in a right place, so I went to the Sonwar shrine to feel better,” the distraught sister says.

“There was a big rush that day outside the shrine gate, so I went back to use an ATM to get some cash. Little did I know that the cash would be used to treat my brother later,” she adds.

Sobia had received a phone call from a relative, asking her to come to SKIMS because her brother had been in an accident, “I never knew that he was fighting a battle between life and death. When I saw him I simply passed out,” she says while sobbing

As Younis hears his sister sobbing, he tries to console her without realizing that he does not have the energy to do so.