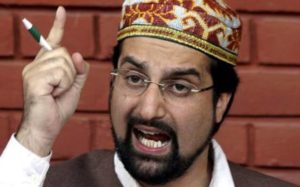 Srinagar: Hurriyat (M) chairman, Mirwaiz Umar Farooq, has said the pro-freedom leadership was in no hurry to respond to Delhi’s assertions over dialogue and will discuss the matter in the coming days and after due deliberations.

“I ask those who give us sermons about peace and development, which people in the world would not want development, the fastest of progress, or the best of institutions for their children? But the pro-freedom leadership was in no hurry to respond to Delhi’s assertions over dialogue, and will discuss the matter in the coming days and duly deliberate any offer,” said Mirwaiz while addressing a mammoth gathering on the eve of Jumat-ul-vida (the last Friday of the month of Ramzaan).

He said Kashmiris were happy that for whatever reason good sense seems to have prevailed upon the Government of India (GOI), and that they have realized the futility of using force against the people in this “David versus Goliath battle of justice versus occupation, and principles versus opportunism contest.”

Mirwaiz said the credit for any effort on part of the GoI, if it really means to resolve the dispute, only goes to the perseverance of the people of Kashmir and especially the youth.

Home Minister Rajnath Singh on Thursday had said that he will not give any hype to the talks with “separatists,” and will only talk to the “right minded people” to address the Kashmir issue.

“As the flip-flops continue, what we are observing is not so much a change of heart among the rulers, but rather a change of strategy forced upon them by the change in circumstances,” Mirwaiz said.

Delhi also showed willingness to offer talks earlier by stating that it was ready to hold talks. In response, the resistance leadership jointly stated that they were ready to join the process, provided the GOI cleared its stand on the nature of the talks, as the offer was too ambiguous in the present format.

Mirwaiz said extreme repression has been pursued as state policy since the Bhartiya  Janta Party (BJP) came to power in New Delhi four years ago, and this was a complete departure from the previous BJP regime led by Atal Bihari Vajpayee Vajpayee.

“An all out assault was launched on the people on all fronts: militarily, legally, economically, or though planning demographic change. Articles 370 and 35 A were challenged in Indian courts; GST implemented in defiance of our special status and laws of the state;  pushing of the Sarfesai Act; separate settlements for certain communities along the Israeli pattern of occupation; and viscous and negative propaganda of Kashmiris to cripple our economy by dissuading outsiders to come here was all part of the plan,” he said.

He said that regular arrests and detentions of the leadership, and harassment by the National Investigation Agency and a continuous witch hunt was part of their policy of hounding the pro-freedom camp.

“On the military front,  a full-fledged offensive was launched by the name of Operation All Out, during which hundreds of civilians have been killed besides armed youth rebels. It was actually Operation “Wipe Out “of Kashmiris, as no men or women, young or old, were not spared. Even lactating mothers were killed. On the LoC, greater belligerence was adopted, escalating the situation,” Mirwaiz said.

He said the GOI was able to this only in partnership with ‘willing local collaborators’ who are kept in the chair to provide a buffer for these polices and to help carry them out, backstabbing those who had reposed some faith in them while electing them,” he added.

The Hurriyat Chairman said and for the past 30 yrs in particular, Kashmiri’s have been facing this situation, but it worsened over the last four years of the BJP-PDP rule when the harshest of repression measures have been tried and tested.

Mirwaiz said it is the failure of these harsh policies and the resultant international pressure that today we are seeing the “softening” in their stand.

“What brought about this change in circumstances is the persistence and commitment of the people to their struggle for asserting their right to decide their destiny and rejecting occupation,” he said.

Mirwaiz said it is the blood and sacrifice of the life of our youth, and their zeal and courage to stand up to the might of the third largest military power in the world, which is no small feat.

“It’s this commitment, this fearlessness of the people in the face of extreme repression that has forced GOI and its generals to talk of lose -lose for both sides if the military option is pursued any further. It’s not a small achievement that the determination of our youth made the world’s third largest military power admit this,” he said.

“It is the victory of the peoples’ perseverance and their faith in their sabr. Despite utmost killings, repression, humiliation, harassment, and intimidation, the GOI has failed in subduing the Kashmiris, or dissuading them from their path of fighting for their fundamental right.”

Mirwaiz said in fact the repression had only added to the anger and alienation, prompting many among the youth, mostly educated and well settled like Riyaz, to sadly take to the gun.

“Every youth in Kashmir has shown resilience to occupation and rejected the subjugation in some way or other. Their deep connect with the struggle for self-determination is visible everywhere. Whether protesting on streets or in their educational institutions, or participating in the funerals of martyrs, or in the cyber world, or on social media,” he said.

Mirwaiz said all of this has made the GOI realize that despite its huge military apparatus and all the resources at its disposal, it has failed to crush the people and the sentiment.