Five more Police battalions to be raised in the state: Rajnath Singh

‘Decision to extend ceasefire will be taken after security meet’ 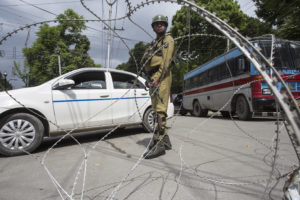 While talking to reporters at Kupwara during his visit, Singh said 60 percent of the vacancies for these IRP battalions will be reserved for the people of border areas.

Earlier, the local media has reported that newly raised battalion would comprise of 1100 personnel which mean the five battalions proposed for J&K will recruit 5500 policemen.

Expenditure on this count will be shared in the ration of 75:25 between the Central and the State Government.

The raising of five new IRP battalions would need Rs 305 crore expenditure and the Centre has agreed to bear 75 per cent cost of it.

226 crore rupees worth expenditure would be borne by the Government of India and Rs 79 crore by the J&K Government.

The total count of policemen in Kashmir numbers over one lakh. This figure does not include the already existing IRP battalions and  the special police officers (SPO’s).

Rajnath said that the decision on extension in ceasefire would be taken after reviewing the security and proper consultations thereafter with the public representatives of Jammu and Kashmir.

Talking to reporters after meeting public delegations in frontier district Kupwara, Home Minister said that “central Government has taken some measures and further steps would also be taken for the welfare of border population”.

Home minister is on a two day visit to Kashmir. After returning from Kupwara, Rajnath will fly to Jammu and will visit border areas affected by the cross border shelling.