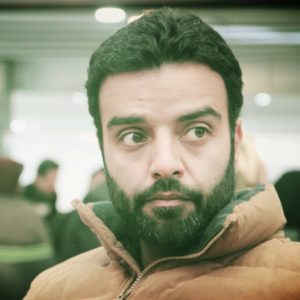 Srinagar: The National Conference leader and legislator Ruhullah Mehdi has termed the self styled Imam Tawhidi as a joker.

In a series of replies to Tawhidi’s tweets regarding Kashmir, Mehdi asserted that if one wears a turban, it does not mean he is Aalim (scholar).

Their fight became visible on twitter following Tawhidi’s defence of government forces wherein he had legitimised the mowing down of Kashmiri youth Qaiser Amin by CRPF vehicle at Nowhatta last Friday.

After the incident he had tweeted:

“I see Kashmiri Islamists have waged Jihad on Indian police once again. If you throw massive rocks at the Police when they drive, they will possibly mow you down because he can’t see you anymore. Stop smashing police windows at protests so they can drive without mowing you. Fools.”

His tweet elicited stinging response from the Kashmiri netizens who described Tawhdi’s comments as ‘provocative,’ ‘foolish’, ‘stupid’ and full of ignorance.

In a direct attack on Tawhidi, NC leader Ruhullah Mehdi in a tweet accused self styled Imam of being an MI6 agent.

In one of the tweets NC leader compared Tawhidi with the infamous jailed god man Gurmeet Singh aka Baba Ram Rahim and called him a “taghooti”- a tyrant.

“This Oz parallel of Gurmeet Singh has actually a misspelling in his name.“Tawhidi” is actually“Tagooti”. The introduction of these self-imposed “Imam”is already given in Quran in the verse called Ayatal Kusri, calling them “awliyauhumu tagoot”. Don’t take this MI agent seriously,” Mehdi tweeted in response to the Tawhidi’s tweet.

In response, Tawhidi hit back at the NC leader Ruhullah and ridiculed him for having lack of knowledge in the subject of Islam.

“You’re a fail as a Muslim and a fail as a Kashmiri politician. It’s ‘Ayat Kursi’, not ‘Kusri’. You try to use the Quran to prove your point against me but you made a fool out of yourself. Ayat Kursi doesn’t speak about ‘Taghoots’ (tyrants), you utter clown,” Tawhidi tweeted in reply to Ruhulla’s tweet.

The spat did not stop there.

“Typing mistake does not make you a fail Muslim, conscientiously selling your faith does. Putting that turban on your shallow head does not make you an ‘Alim’. Go ask your masters, who have given you this job of acting as an Alim, that I told you about Taghoot in ayat al Kursi.”

Tawhidi in his reply accused Mehdi of changing the Quran and called him a terrorist like ISIS.

”You didn’t make a typing mistake. You changed the Quran. So you’re a fail. At least I have a head to put a turban on. Maybe you should stop sitting on your head. Face me in a debate any day. You’re a terrorist just like ISIS. India is a crown on your head, forever.”

The tweet however didn’t bog down the NC leader who came with an even sterner reply where he termed the Imam as Joker and questioned the standard of the ‘Intel agencies’ for which Tawhidi is accused of working for.

“Hahaha! You are such a joker. I pity the standard of these Intl agencies who hire people like you for this acting job. I am ISIS? Hahaha. Fine, though it is below my self respect and place to debate a person like you. But will make an exception for once. Won’t give you an excuse.”

Imam Tawhidi is an Iran born Australian cleric who terms himself as an imam of peace.

He is accused by the Iranian government to be a an agent of MI6 which works against the Muslim unity .

Tawhidi is known for his anti Islamic and anti Iranian views.