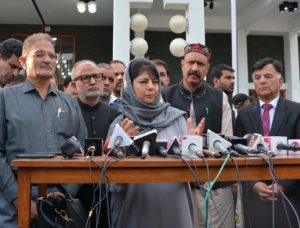 Srinagar: The chief minister Mehbooba Mufti has said that India and Pakistan should employ peace offensives to silence the hawks on both sides of the border.

In a statement, Mufti stated that there is no reason why the political “leadership of our country and that of Pakistan not employ similar peace offensive as the one initiated by Vajpayee so that the hawks on both side are silenced and the people of J&K get a reprieve from constant war and threat of it”.

She said that while people in mainland have heaved a sigh of relief due to the “magnanimous unilateral ceasefire” announced by the central government, time has come to extend this confidence building measure (CBM) along the borders as well for which onus lies with Pakistan also to respond positively in the larger interest of peace and stability in the region.

Expressing grave concern over the painful and distressing situation prevailing along the borders in Jammu and Kashmir in the wake of latest spate of killings in cross-border shelling, chief minister called for immediate cessation of hostilities to safeguard the lives and properties of the hapless people caught in the deadly crossfire.

“It is the life and property and sense of security of the people of J&K which are in the line of fire and every bullet or a mortar shell fired hits only the residents of this state on either side,” the Chief Minister said in a statement while expressing anguish over the killing of more civilians during previous night in fresh shelling along the International Border in Jammu.

Stressing the need for building a strong peace initiative from within the state, Mufti said more than a decade and a half back the then Prime Minister, Atal Bihari Vajpayee in an impressive display of statesmanship had opened a new chapter in the “blood-soaked history of India and Pakistan” by responding to the urge for peace and dignified resolution during his historic visit to Srinagar in 2003.

“The people of the state especially those living in border areas had experienced an entirely new-found peace and environment of security after the 2003 ceasefire with Pakistan,” she said.